Despite Great Britain sacrificing some sovereignty to the European Union, its parliament is still responsible for more than 98% of public spending, and has the final say on the majority of policy that voters care about, research published today (9 May) found.

The idea of the country being subject to floods of legislation drafted by faceless, unelected bureaucrats in Brussels remains a powerful stereotype in Britain. It is regularly invoked by campaigners for Leave in the 23 June referendum on the UK’s EU membership.

“The argument that Britain needs to leave the European Union to reclaim its sovereignty is misguided,” said Dr Robin Niblett, director at the Chatham House think tank.

What matters is not ‘absolute’ sovereignty, according to the paper, but ‘effective’ sovereignty – a country’s ability to achieve its objectives.

In the past Britain has used this effective sovereignty to curb Iran’s nuclear programme, slap Russia with sanctions and create the single market.

The UK had sacrificed sovereignty by joining NATO and signing up to defence treaties that improve its security, and by extension its sovereignty. That proved that absolute sovereignty was not always in the national interest, the paper said.

Globalisation had exposed the growing inability of sovereign governments to deliver prosperity on their own, said the paper. That had led to Britain signing up to deals that balanced sovereignty with the need for formal structures of economic cooperation such as the World Trade Organisation.

“The debate in Britain over sovereignty is in a sorry state – absolute sovereignty is worthless if it reduces the prosperity and security of British citizens,” said Niblett.

“The important thing is the government’s ability to secure outcomes in the interests of the British people – and that is unquestionably enhanced by membership of the European Union.”

Niblett said that the extent of EU influence over sovereignty was grossly overstated.  Brexit would mean British decision-makers would be forced to spend more time and effort negotiating with the EU than it does today, he added.

The British government retains power over most of the policy that voters care about, with the exception of immigration from the EU, his report Britain, the EU and the Sovereignty Myth found.

While immigration from the EU cannot be controlled by Westminster, the British government holds sway over healthcare, income, capital gains and corporation tax, education, pensions, welfare, defence and foreign policy.

This UK sovereignty comes about because the EU either has no right to act in that policy area, or because EU-level decisions in that area require the unanimous support of all member states, in effect giving the Brits a veto. 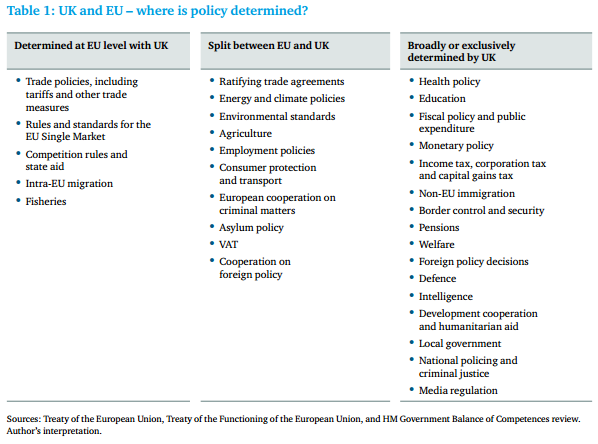 Another way of measuring sovereignty is through public spending, according to the paper. In 2014/205, the UK’s net contribution to the EU budget was €11.1 billion, just 1.2% of the total public spend of €930.6 billion.

Britain’s effective sovereignty could be reduced by Brexit, the paper said.  British exporters would need to abide by EU rules to access the single market without the UK’s influence on their drafting.

This imbalance would greatly reduce the UK’s economic leverage post-Brexit, the paper said.

Brexit would also not solve the perceived problem of immigration from the EU. The 2.4 million EU citizens in the UK will retain the right to retain, according to Niblett.

EU citizens would still be able to move to Britain to work during the two years or so that Brexit would be negotiated. An even greater number of EU migrants could move before Brexit takes place.

Niblett argued that high levels of EU migration would continue because of the needs of the UK labour market.

Meanwhile, British Prime Minister David Cameron warned on Monday (9 May) that
a British exit from the EU would threaten peace on the continent, as the campaign for next month’s crucial referendum gathered steam after regional elections.

With polls showing the “Remain” and “Leave” campaigns neck-and-neck, Cameron and former London mayor Boris Johnson, the “Leave” movement’s de-facto leader, clashed as they stepped up their efforts to woo undecided voters.

A vote to exit the 28-member bloc in the June 23 referendum would be a “reckless and irresponsible” risk to Britain’s economic stability that would leave it “permanently poorer”, Cameron warned.

He also said a “Brexit” would threaten Britain’s strength and security in the world, along with peace on the continent if “Europe’s foremost military power” quit the European Union.

“Isolationism has never served this country well,” Cameron said in a speech at the British Museum in London.

“Whenever we turn our back on Europe, sooner or later we come to regret it.
We’ve always had to go back in, and always at a much higher cost.”