Charles Benjamin on leadership: Be flexible and ready for an ever-dynamic environment 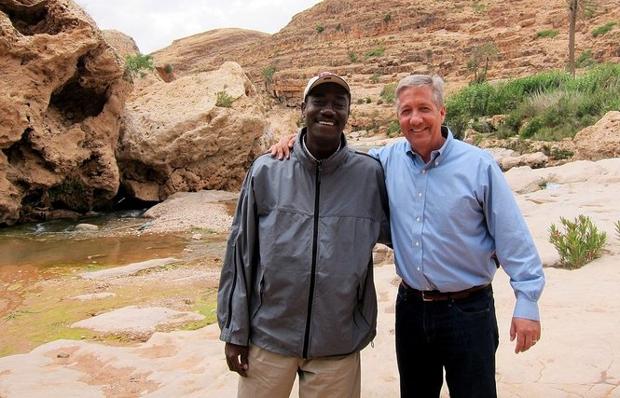 For nearly a century, the Near East Foundation was headquartered in New York City. In 2010, the foundation affiliated with Syracuse University and moved its headquarters to a building at Euclid and Ostrom avenues.

At the time, Charles Benjamin was working in Washington, D.C., for International Resources Group. He was on the Foundation's board and with the move to Syracuse, he was recruited to be president.

Benjamin oversees a staff of nearly 150 people - 13 at headquarters in Syracuse. The rest are scattered in eight countries. The foundation's budget has grown to $16 million, nearly half of it from foreign governments - in particular the British, the Dutch, the Danish, the European Union.

The Foundation began in 1915 when President Woodrow Wilson asked Americans to provide relief for Armenians displaced by the breakup of the Ottoman Empire in World War 1.

"It was a new idea that Americans could systematically help people in need halfway around the world," Benjamin said. "There was a massive outpouring of humanitarian engagement by the American people. There were chapters in every major American city and in every state. There was a chapter here that was started by Chancellor Roscoe Day at Syracuse University. There was a substantial refugee program at the university to bring Armenian refugees into the area to study and rebuild their lives."

Were you in leadership roles growing up?
I was never student council president or anything like that. I always worked hard and tried to do what I do well.

I grew up in Columbia, Mo., and graduated in 1986 from the University of Missouri. I joined the Peace Corps and went to Morocco. I came back to Missouri for a master's degree and then went back to Morocco on a Fulbright Scholarship to study traditional agriculture irrigation. Then I was recruited to the Near East Foundation.

My first leadership position was with the Near East Foundation in Morocco as a country director.

A country director conceives of projects, finds funding, builds a team, ensures the projects are managed so they're efficient and impactful. In my case, I started a technology center in the southern part of Morocco. We had restored an old Kasbah, an old mud castle.

We built that center and that program from a staff of one and a budget of probably $6,000 to a staff of 20. It was exciting to create something. We had projects in villages all over the slopes of the High Atlas Mountains, down into the desert. We were doing work with sustainable agriculture, domestic energy, fuel-efficient cook stoves, literacy. We started getting away from hard technology to more community organizing and soft technology like literacy.

Let's say a young person comes to you and says they have a shot at leading an organization. What's your advice to become an effective leader?
In Morocco, I remember saying to myself: We just need to do this and we can settle into a routine.

We never found the routine. (Laughs) It was always constant problem-solving, critical analysis, crisis management, and celebrating successes that were beyond what we expected.

I learned that you have to be flexible and ready for an ever-dynamic environment.

I've learned over time that things always get better. Things may look insurmountable today, but they do get better.

We experienced that after the financial crisis (2008), wondering what was going to happen to the organization. We contracted and focused on what we wanted to be good at.

An effective leader is a good partner. I view my relationships with my staff as partnerships.

Is respecting a diversity of sensitivities important in leadership?

I think so. It's not only in a cultural context. It's in an individual context, too.

I'm not saying I always handled them right. But I think a leader needs to try to navigate and articulate positions and arguments in a way that is respectful.

Being respectful requires being self-aware.

An international cross-cultural context has many dimensions that are difficult to navigate, but I think the principle applies even here in the U.S.

Every business, every organization, faces obstacles or setbacks. What's your advice for dealing with one?

I think of the Near East Foundation and managing the post-2008 financial crisis. That was a setback. I feel strongly that the situation forced us to reevaluate who we were, what we were doing, how we were doing it.

With persistence and focus, we were able to weather through.

As the leader of an organization, you have to surround yourself with good people, build the right kind of partnerships and get everybody on board to do it together.

What special problems or challenges does working in an international environment present?

All of our leaders and staff overseas are from the countries where they work. This is a distinctive quality of the organization.

We have offices in Morocco, Mali, Sudan, the Palestinian Territories, Jordan, Lebanon, Armenia and a partner we work closely with in Senegal. Our centers of activity are far from Syracuse, but they'd be far away from New York or Washington. So it's not unique to being in Syracuse.

They're in very dynamic environments. The Middle East now compared to the Middle East in 2010 is a very different place. Our whole staff here works with our teams overseas to make sure that one they don't feel like they're operating in isolation and that they have the right kind of support.

The whole Syrian refugee situation is something that has been going on now for a fifth year. We've adjusted our work to focus on that changing environment. We've worked in Jordan since 1938. We have long-term relationships with communities. Communities now are much more complex than they were five years ago. In Jordan, you have Iraqis - people have forgotten about Iraqi refugees - and Syrians in growing numbers.

That's the new reality of these communities where we work. We want to be able to serve the most vulnerable regardless of their identity. That poses challenges as well.

"CNY Conversations" feature Q&A interviews about leadership, success, and innovation. The conversations are condensed and edited. To suggest a person for CNY Conversations, contact Stan Linhorst at slinhorst@syracuse.com.

Last week: Jackie Wilson, founder of the fast-growing American Fashion Network, advises new leaders to be yourself, invest in your people, be honest and transparent and be confident that you'll figure things out.