Martin Schulz, the president of the European Parliament, told a news conference late Thursday “there could be an agreement within the next hours,” as the Walloons met to consider new proposals on offer.

But a second issue blocks unanimous support for Canada’s trade deal, and this one’s comparatively easy for Justin Trudeau to fix.

Romania and Bulgaria have yet to remove their reservations to signing the Comprehensive Economic and Trade Agreement, also known as CETA, because of delays in resolving a longstanding visa dispute.

​“We have a big issue here. This is my nightmare scenario,” said Sorin Moisa, a Romanian member of the European Parliament.

Neither country intended to stand in the way of the trade deal. The visa issue is separate.

But politically it became linked after Canada appeared to delay resolving the issue. The two European countries took their stand. Now everyone’s a bit stuck.

“The Romanians simply do not trust the Canadians to make the announcement on visas after they have withdrawn their reservation,” Moisa said. “Because the Canadians have changed their minds so many times on nuances … we simply want to see the decision publicized or formalized before we withdraw the reservation.”

Moisa used to lobby in favour of CETA as the interlocutor for Canada’s trade deal among the key S&D block of socialists and democrats — until he felt forced to resign over Canada’s inaction on the visa file.

Most of what he hears around Brussels now, he says, suggests momentum against the deal. Supporters have kept silent.

Eighty-eight MEPs signed a letter in support of Wallonia’s stand.

Letter of support from 88 MEPS to @PaulMagnette and the Governemnt of Wallonia in their rejection of #CETA pic.twitter.com/tp72rtGNM1

Moisa described supporting Wallonia’s right to veto as “very dangerous” and a way to kill democracy in the European Union: the Walloons are undermining the European Parliament as the body tasked with debating and ratifying trade deals.

He’s been in the middle of talks to lift the visa requirements, which went right to the top: between Prime Minister Justin Trudeau and his Romanian and Bulgarian counterparts.

European media report, and Moisa confirms, that as of May 1, 2017, visa requirements will be lifted for Romanian and Bulgarian nationals who were issued Canadian visas over the last 10 years.

All other Romanian and Bulgarian nationals could travel visa-free before the end of 2017.

The leaders have had several phone conversations in recent weeks, trying to reassure the Europeans that they shouldn’t hold back on CETA because the visa solution was close. But they expected a deal long before now. 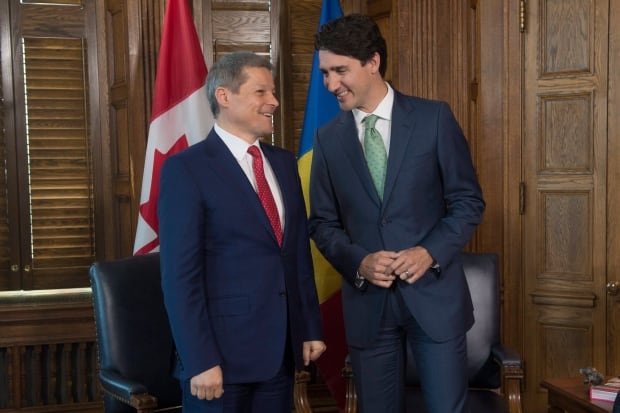 Prime Minister Justin Trudeau met Romanian Prime Minister Dacian Ciolos in Ottawa last June. At the time, a solution to the visa dispute was thought to be in reach, but nothing’s been announced yet. (Adrian Wyld/Canadian Press)

“The wise thing to do would be, in my opinion… for Canada to announce its decision today,” he said.

“If Belgians decide OK, we’ll go ahead tomorrow morning, the problem is Trudeau will be sleeping,” Moisa said. “So what do we do, we hold the summit here until late afternoon when Trudeau wakes up to publish the decision?”

‘This is unfair, for an issue that’s been there for a decade,” he said. “We should have solved this issue irrespective of CETA anyway.’ – Sorin Moisa, Romanian member of the European Parliament

“This is unfair, for an issue that’s been there for a decade,” he said. “We should have solved this issue irrespective of CETA anyway.”

It’s unclear what Canada is waiting for, short of executing a strategy to hold back until it’s clear CETA will proceed.

But things may quickly devolve into a chicken-and-egg-type dilemma: what comes first, the visas or the signing?

Her last-minute travels appeared to contradict her comments earlier in the day that the ball was in Europe’s court now. 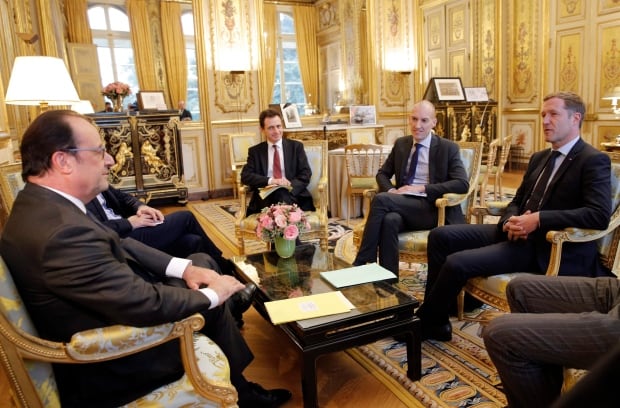 Prime Minister Charles Michel, who represents Belgium at the European Council talks Thursday and Friday, wants to sign CETA, but is not supposed to without the consent of regional counterparts.

He risks a constitutional court challenge if he gives in to pressure and signs anyway — but some legal opinions suggest the negative votes in the Wallonian parliaments are non-binding.

“I have a lot of respect for the role of our parliaments and democracy. But democracy means that at one moment you need a decision.”

CETA could be our last free trade agreement, if we are not able to convince people that we negotiate to protect their interests

Talks continue toward an additional “joint interpretative declaration” to clarify how text should apply if disputes arise over member states’ rights to regulate in areas like environmental or labour policy. Diplomats told Reuters that the latest version of the declaration attempts to address Wallonia’s concerns about agricultural trade and dispute arbitration.

Additional declarations have been drafted and circulated by the EU this week to ease other late sticking points, such as Greek concerns over adequate protections for geographic indicators like “feta” cheese.

Freeland’s personal lobbying continues as she heads to Oslo, Norway late Thursday in preparation for this weekend’s ministerial meeting of the World Trade Organization.

Her decision to stop in Belgium first was a precautionary, good faith move, her office said: far from looking uncompromising, she wanted to signal Canada listens to concerns.

CETA opponents in Europe — for whom Magnette has become a charismatic standard-bearer — portray Canada as a bully, exerting pressure on sovereign local governments to give in. Freeland wants to deny that oxygen.

A spokesman for Magnette said in a text message to Reuters late Thursday that talks with EU officials about Wallonia’s concerns were now completed, but he gave no indication of the outcome.

Magnette summoned his government for a meeting late on Thursday, the spokesman said, and will address parliament on Friday morning.

It’s unclear now what the real deadline is for deciding to proceed with a signing ceremony at a planned Canada-EU Summit on Oct. 27.

When Tuesday’s trade ministers talks failed to approve signature, Friday was set as a new deadline. Magnette originally made statements rejecting that.

Now the last-ditch deal-saving may stretch into the weekend.