Last-ditch efforts to salvage Canada’s trade deal with the European Union appear to have collapsed Friday, as International Trade Minister Chrystia Freeland walked out of talks with the regional government of Wallonia that’s been blocking the deal that was supposed to be signed next week.

Freeland said that the failure to come to a consensus and proceed with signing the Comprehensive Economic and Trade Agreement (CETA) at the planned Canada-EU Summit next Thursday was a “missed opportunity.”

Earlier, Paul Magnette, the president of the Belgian region of Wallonia, briefed his regional parliament, saying that although talks were productive, difficulties remain and he’s not prepared to reverse the decision to reject CETA.

“We made new significant progress, especially on the agriculture issues, but difficulties remain, specifically on the symbolic issue of arbitration, which is politically extremely important,” he said in French.

Magnette shared with his MPs modifications proposed by European Union officials after lengthy discussions stretched late into the evening Thursday.

The European Commission, not Wallonia directly, is in charge of negotiating the deal with Canada on Belgium’s behalf. But because Belgium’s constitution gives regional governments a role in trade agreements, this local legislature representing a few million people has ended up with an effective veto over a trade deal that impacts the entire continental trading block of over 500 million.

“After consideration, [the modifications] are not enough. We need to go deeper on other issues such as the public services, and some definitions need to be more accurate, but the discussion we had with the Canadians was very constructive,” he said.

Magnette’s rejection of the EU’s most recent offer adds more drama to a week of deadline extensions and existential debate, as Europe fights for the consensus it needs both inside Belgium and across its 28 member states in order to proceed with a deal it desperately needs to make.

On Thursday, the president of the European Union, Donald Tusk, offered the blunt assessment that if this hard-fought deal with a progressive partner like Canada couldn’t move ahead, the EU’s credibility as a negotiator of any free trade deal in the future was in doubt.

“We have tried to work over the last few hours and during the night,” Belgian Prime Minister Charles Michel said as he arrived at the European Council talks in Brussels Friday morning. “I spoke on the phone with Justin Trudeau to see what avenues we could be pursuing to come out of this difficult situation on top.”

Michel characterized the talks as “hour by hour.”

“I am not reassured at this point, but I don’t want to say anything else that may add fuel to the fire and stop us from reaching an agreement. On the contrary, if the door is slightly ajar we must do everything in our power to push through it and come out on top from this difficult situation,” he said. 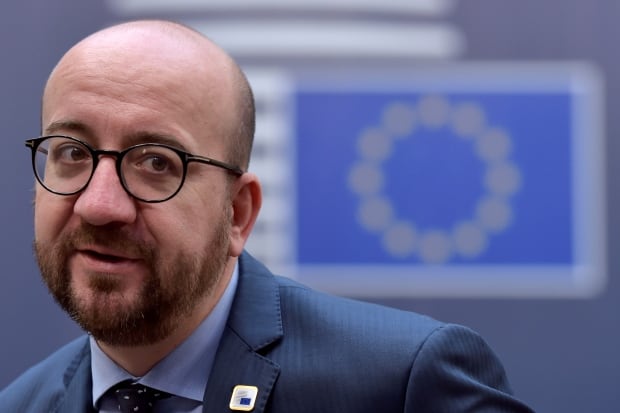 Freeland said earlier this week that the ball was in Europe’s court to sort out its internal difficulties.

But over the last 24 hours, her plans to travel to World Trade Organization talks in Oslo, Norway were postponed so she could play a role in negotiations with the Walloons.

“I asked the Canadian Minister of Commerce to come to Brussels to give all the details and all the information that generally someone in the Walloon government could have,” European Commission President Jean-Claude Juncker said Thursday evening.

“I am very grateful that she travelled to Brussels,” he said. “I think that the level of contact and the intensity of the contacts we had with the Canadians will be seen, one day, as having been useful.”

It’s not immediately clear exactly what compromises or modifications Canada offered or agreed to in the last day of frantic negotiations.

Additional reservations to signing the agreement from Romania and Bulgaria have also not been lifted, pending resolution of a long-standing visa dispute.

If the last-ditch efforts are successful, 98 per cent of the tariffs on goods traded between Canada and the European Union could be dropped provisionally as early as next year, potentially lowing prices on a wide range of products.

The agreement as negotiated goes far beyond tariffs, however, eventually opening things like government procurement which may provide opportunities for Canadian bidders in European jurisdictions.

Common regulatory standards are meant to facilitate the ramped-up trade in goods and services. 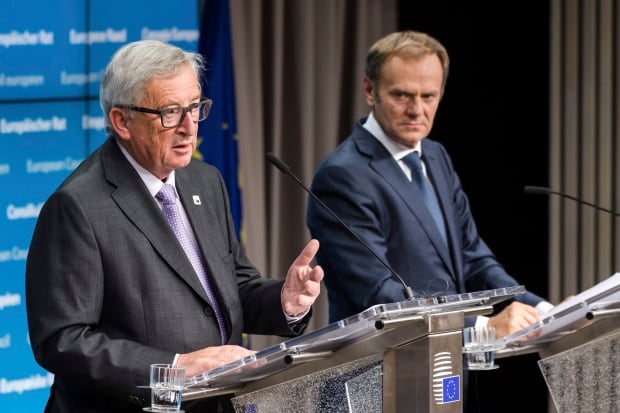 European Commission President Jean-Claude Juncker, left, and European Council President Donald Tusk warn that if the European Union cannot sign its trade agreement with Canada, the credibility of its entire trade policy may be in jeopardy. (Geert Vanden Wijngaert/Associated Press)

But Canada has also agreed to allow more European imports of everything from cheese to cars. If CETA fails, Canadian businesses concerned about their losing market share may sigh with relief.

Controversial foreign investor arbitration measures, already reworked once earlier this year, appear likely to be put on hold pending a court decision expected next spring and full ratification by over 30 national and sub-national legislatures across Europe.

Canada’s current trade with Europe is dominated by traditional trading partners such as the United Kingdom, which may not even be inside the European Union for much longer, thanks to the results of its Brexit referendum earlier this year.

CETA was supposed to provide an opportunity for Canada to expand its European trade to new markets and emerging economies in Central and Eastern Europe, as well as re-enter the continental market in key agricultural commodities like beef — something effectively shut out as the EU’s internal market protections shielded domestic industries in recent decades.