Britain's trade options after Brexit: no easy way out 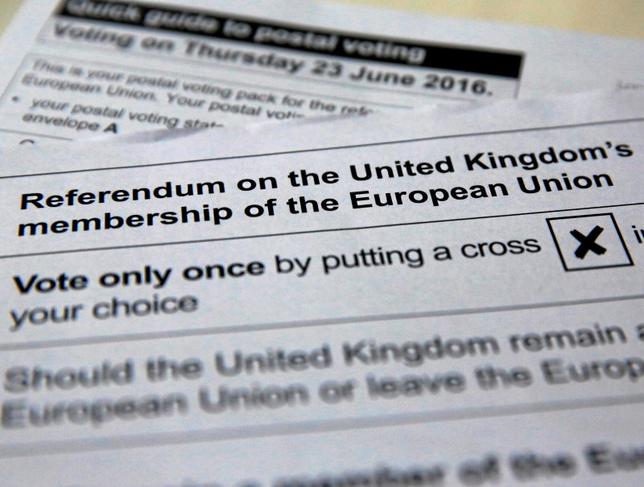 Illustration picture of postal ballot papers June 1, 2016 ahead of the June 23 BREXIT referendum when voters will decide whether Britain will remain in the European Union.

Britain’s status as a trade power has become one of the most contentious issues in the European Union membership referendum on June 23.

The uncertain outlook for exporters, and the implications for investment in Britain, are driving much of the nervousness in financial markets where the pound has weakened sharply.

“In” campaigners, led by Prime Minister David Cameron, warn that Britain’s economy would suffer if it lost its unfettered access to the EU’s single market of over 500 million consumers.

Britain would lack negotiating muscle for any new deal, they say, because 44 percent of its exports go to the EU compared with 8 percent of the EU’s exports that go to Britain.

On its own, Britain would also struggle to secure deals with non-EU countries, the “In” camp says.

By contrast, “Out” campaigners say the EU would do a deal with Britain because of its importance as an export market.

It also says Britain would strike deals with other nations, such as the United States and China, more quickly than the EU with its 28 member countries and their different priorities.

Below is a summary of the various trade options for Britain in the event of a so-called Brexit.

Many Brexit supporters, among them former London mayor Boris Johnson, point to a recently agreed deal between Canada and the EU as a possible model for a post-Brexit Britain.

Under the Canada model, Britain would no longer have to allow in workers from across the bloc or pay into its budget, two unpopular EU requirements among voters.

But the Canada deal, which took over a decade to negotiate, involves only a partial opening up of the market for services, which make up nearly 80 percent of Britain’s economy. Banks would not have the same kind access to the EU they do now.

Finance minister George Osborne says such an agreement would leave Britain’s economy 6.2 percent smaller by 2030 than it would be if it stayed in the EU.

Norway has a trade deal that gives it access to the single market, as part of the European Economic Area. A deal like that would allow British-based banks to carry on doing business in the EU.

But Norway accepts free movement of EU nationals and pays a contribution to the EU budget as large as Britain’s, when measured per person, two of the things British “Out” supporters most resent about EU membership.

Norway also has to accept the EU’s single market rules and regulations without a having a say in making them.

Switzerland has bilateral deals with the EU which give it access to bits of the single market in return for a fee, but it does not have the right to provide cross-border financial services. Big Swiss banks have set up subsidiaries in EU countries, adding to their costs.

Switzerland also adopts EU rules in the areas in which it has single market access and accepts the free movement of EU citizens although a vote in favor of restrictions, at a referendum in 2014, has jeopardized Swiss-EU economic ties.

Brexit supporters say German car exporters or French wine-makers would press their capitals to do a deal with Britain rather than punish it for leaving. But if the price of a broad deal was the continued free movement of people and budget contributions, a less ambitious arrangement might be struck.

British justice minister and “Out” campaigner Michael Gove says Britain could strike a deal with the EU similar to ones reached by Bosnia, Serbia, Albania and Ukraine. “In” supporters say those deals are no model for Britain’s much bigger economy and do not cover non-tariff barriers such as standards.

German finance minister Wolfgang Schaeuble said on June 10 that Britain would not be able to continue to benefit from the single market like Norway or Switzerland if it quit the EU.

Britain could fall back on World Trade Organisation rules to govern its relationship with the EU if it cannot strike a deal.

“Out” supporters say import tariffs on most goods traded between rich economies have been cut to very low levels.

But the EU has higher tariff levels on some goods including a nearly 10 percent duty on automobiles, an industry which employs about 800,000 people in Britain. Cutting tariffs unilaterally would leave some sectors facing fierce competition.

Furthermore, the WTO has not yet significantly opened up global trade in services. British exports would face non-tariff barriers such as rules of origin and other red tape.

WTO boss Roberto Azevedo has said Britain might take several years to renegotiate its relationship with other WTO members.

REST OF THE WORLD

A solo Britain would try to strike its own trade deals with countries beyond the EU, including more than 50 which have trade deals with the bloc. The “Out” camp says it would focus on big markets with which the EU currently does not have a deal, such as the United States and China. But in April, U.S. President Barack Obama said Britain would go to the “back of the queue” in U.S. trade talks if it left the EU. The United States and the EU are trying to conclude a wide-ranging trade and investment deal.