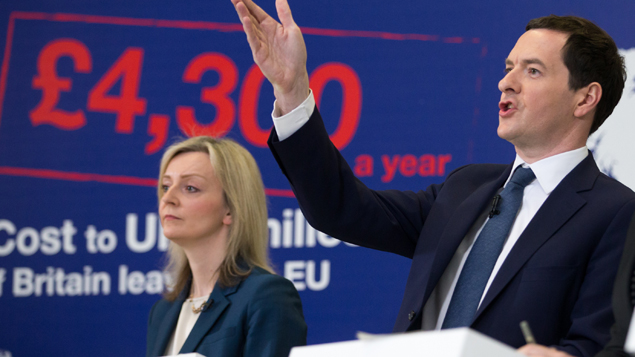 Britain will be permanently poorer if it votes to leave the European Union, with each household standing to lose STG4,300 each year, Britain’s finance minister says.

Britain is holding a referendum on June 23 to decide whether it will remain a member of the European Union.

Presenting a Treasury analysis on the cost of a Brexit on Monday, Chancellor of the Exchequer George Osborne said leaving the EU would result in a less open economy that would lead to lower productivity, lower wages and lower living standards for working people.

“And the price would be paid by British families. Wages would be lower and prices would be higher.”

Britain’s economy would shrink by six per cent by 2030 if the country replicated Canada’s trade agreement with the EU, as advocated by London Mayor Boris Johnson, according to Osborne.

The Treasury document uses a complex model to examine the possible impact of three different possibilities for Britain by 2030 after Brexit: a Norwegian-style membership of the European Economic Area, the Canadian-style negotiated bilateral trade deal, and the fallback option of World Trade Organization rules.

The analysis suggests that under the EEA style approach GDP would fall by between 3.4 per cent and 4.3 per cent.

Based on 2015 data and population figures, a central estimate of 3.8 per cent would leave households 2,600 pounds poorer.

The figures used by Mr Osborne are based on a Canadian-style deal, which would see GDP drop by between 4.6 and 7.8 per cent.

“What I don’t think you can claim is that somehow Britain can have its cake and eat it, that we would have all the benefits of EU membership without the costs and obligations,” Osborne said.

“That is not credible.”