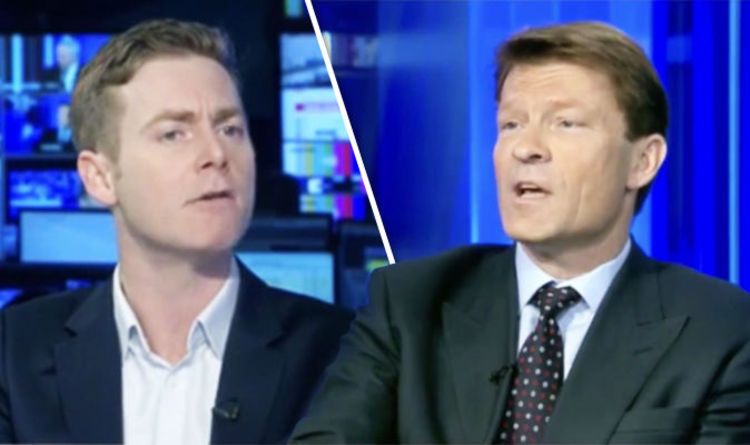 Open Britain figurehead James McGrory hammered Richard Tice, Leave Means Leave who worked with Nigel Farage during the Leave.EU campaign, after he suggested he would be happy to pay the World Trade Organisation’s tariff.

Speaking on Sky News, Mr Tice said: “Most nations around the world have access with the European Union on a WTO basis and it works very well.

“As the Prime Minister has already said we will offer a zero tariff deal – because they sell so much more to us it is in their interests to do it.

“If they don’t we’ll quite happily go to the WTO.”

Mr McGrory, a key figure in the official Remain campaign, chastised Mr Tice for his willingness to leave Britain subject to tariffs.

“You’re just going to go to WTO rules?” he asked. “That’s 10 per cent on cars, 20-odd per cent on agricultural tariffs.

The Leave Means Leave co-chairman claimed such a move would help British manufacturers sell more cars within Britain and shot down Project Fear’s projection that inflation would rise.

“We live in such a competitive market that actually suppliers and retailers are always worried about other businesses taking market share, so they absorb the lion’s share of that,” Mr Tice added.

Mr McGrory replied: “Why would we just voluntarily slap a 10 per cent tariff on a car?

“It’s a two-way street if effects us both. Your idea seems to go to a high noon showdown and don’t even try and negotiate…”

But a quick-thinking Mr Tice swiftly interjected insisting that it will be a “friendly discussion”, saying it was only important to rid businesses of uncertainty by ensuring a swift and clean exit from the EU.

“What businesses want is the certainty of knowing when we are going to leave,” he said.

Theresa May has warned Remain backers they will not be able to block Brexit, as she refused to guarantee a parliamentary vote on Britain’s departure terms.

Instead, the Commons and Lords will be given opportunities to “discuss” details of the exit arrangements but not vote on them.

Speaking at a hearing of the Commons Liaison Committee on Tuesday, Mrs May said: “It’s my intention that Parliament should have every opportunity to consider these matters.

“But what I’m also concerned about is that we deliver on the decision of the British people.

“It is my intention to make sure that Parliament has ample opportunity to comment on and discuss the aspects of the arrangement that we are putting in place.

“When we are able to give clarity, we will.”