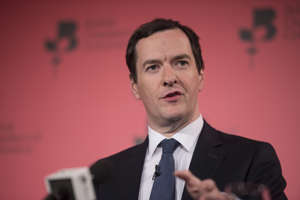 Britain would be “permanently poorer” if voters choose to leave the EU, George Osborne has warned, as a Treasury study claimed the economy would shrink by 6% by 2030, costing every household the equivalent of £4,300 a year.

In the starkest warning so far by the government in the referendum campaign, the chancellor describes Brexit as the “most extraordinary self-inflicted wound”.

Osborne will embark on one of the government’s most significant moves in the referendum campaign on Monday when he publishes a 200-page Treasury report which sets out the costs and benefits of EU membership.

In a Times article the chancellor wrote: “The conclusion is clear for Britain’s economy and for families – leaving the EU would be the most extraordinary self-inflicted wound.”

Osborne warned that the option favoured by Boris Johnson – a deal along the lines of the EU-Canada arrangement – would lead to an economic contraction of 6% by 2030. Supporters of Britain’s EU membership say the EU-Canadian deal would be a disaster for the UK because it excludes financial services, a crucial part of the British economy.

The chancellor asked whether this was a “price worth paying” as he said there was no other model for the UK that gave it access to the single market without quotas and tariffs while retaining a say over the rules.

Osborne continued: “Put simply‎: over many years, are you better off or worse off if we leave the EU? The answer is: Britain would be worse off, permanently so, and to the tune of £4,300 a year for every household.

“It is a well-established doctrine of economic thought that greater openness and interconnectedness boosts the productive potential of our economy. That’s because being an open economy increases competition between our companies, making them more efficient in the face of consumer choice, and creates incentives for business to innovate and to adopt new technologies.”

The Treasury report is understood to examine three options for a post Brexit deal, according to the BBC:

• A Norwegian-style deal in which the UK has access to the EU’s single market. The UK would still make contributions to the EU budget but has no say over the rules.

• A deal along the lines of the EU-Canada deal.

• The so-called “clean break” or World Trade Organisation option, in which the UK trades with the rest of the EU and other nations along the rules laid down by the WTO.

The three options all have downsides, according to the report. The prediction of a 6% drop in GDP is drawn from the middle option.

The chancellor wrote: “The treasury analysis shows that under all plausible alternatives to British membership of the EU we would have a less open and interconnected economy – not just with Europe but, crucially, with the rest of the world. There would be less trade, less investment and less business. Leave the EU and the facts are: Britain would be permanently poorer. Britain’s families would be permanently poorer too.”

John Redwood, the former Tory cabinet minister campaigning for Brexit, dismissed the chancellor’s warnings. Redwood said: “The prime minister was one of the senior advisers working in the Treasury while John Major’s government tried to keep this country in the EU’s disastrous exchange rate mechanism. The ERM destroyed jobs and caused misery for families across the country. The remainers were wrong then, and they are wrong now – people should not trust their judgment on the EU.”

The attempt by the chancellor to paint an exit from the EU as a dangerous step was reinforced by the French economy minister, Emmanuel Macron, who said the UK would be “completely killed” in global trade negotiations if it voted to leave. Macron told the Andrew Marr Show on BBC1: “I think UK is not about becoming Jersey or Guernsey. Today, you are strong because you are part of the EU. When you discuss your steel industry with China you are credible because you are part of the EU, not because you are just UK. You will be completely killed otherwise.”

David Davis, the former Europe minister, said David Cameron could remain as prime minister after a vote to leave the EU but would have to hand the breakup negotiations with Brussels to a minister who had supported exit. Davis took issue with the former chancellor Kenneth Clarke, who said Cameron would be out of No 10 in 30 seconds if Britain left the EU.

Davis said: “If we vote for Brexit then it is clear that David Cameron can’t lead that bit of his government’s activities, the renegotiations. He would have to appoint somebody who the public had faith in, his party had faith in but, most importantly, who believed in the negotiation. If he did that I don’t see any reason why he shouldn’t go on.”

Downing Street is hoping the campaign to keep Britain in the EU will receive a boost this week when Barack Obama endorses Britain’s membership of the EU. Boris Johnson has accused the US president of hypocrisy because Washington would never agree to surrender sovereignty in the way EU member states do. Grayling said Obama did not understand the nature of the pooling of sovereignty among EU member states.

The head of BHP Billiton, one of the biggest mining companies listed on the London Stock Exchange, has also warned of the uncertainty an exit would provoke. Andrew MacKenzie, the Scottish-born BHP chief executive, will say in a speech on Monday night that the “unknowns of Brexit are unwelcome at a time when Europe and the world economy need certainty and stability”.

Chris Grayling, the leader of the Commons and one of a handful of cabinet ministers backing Brexit, questioned the way in which Downing Street and the Treasury were using government resources to campaign for a pro-EU vote. He highlighted the recent £9.3m leaflet, due to be sent to all UK households before the referendum. “It is certainly not being treated by voters as an independent, authoritative document. Therefore it is right and proper they should be very sceptical about some of its contents.”