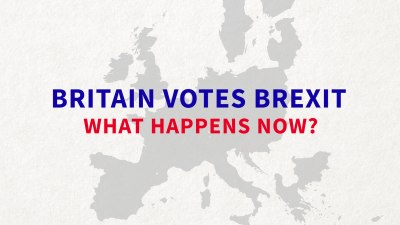 via LinkedIn: Dar es Salaam, Tanzania — JAMES Ndale (not real names), a street vendor selling music CDs along the Julius Nyerere Road and a user/beneficiary of Infrastructure, one of the focal sectors of European Union (EU) cooperation well supported by funding from the EU’s European Development Fund, may not have learnt by now that on 23 June 2016 Britain – a former colony of the then Tanganyika Territory (now Tanzania) – decided, on a referendum, to cut itself adrift from the EU by a 52% to 48% vote; although Scotland, London and Northern Ireland all had a majority for remaining.

The overarching argument for the decision was that the EU has undergone remarkable changes and developments over time, thereby diminishing the sovereignty of Britain and its capacity to project dominating power and influence on European and global events and possibilities.

Britain’s exit from the EU, widely referred to as the “Brexit”, has shocked global financial markets, depressed investor confidence and plunged the British Pound Sterling (GBP) to its lowest level since 1985, according to recent news reports.

Following the surprise victory for the Brexit, Mr. David Cameron has also announced he’s to step down as the Prime Minister of Britain by October 2016, but the French Foreign Affairs Minister, Mr. Jean-Marc Ayraut, has gone as far as to call for Mr. Cameron to make way hastily for a new British prime minister.

Even more astonishingly and fickly, now, almost three days after the vote to leave the EU, market turmoil and potential crisis lurks over the global economy.

The Bank of Tanzania (BOT)’s Governor, Prof. Benno Ndulu, needs to ‘keep an ear to the ground’ on any real, direct and immediate impacts; and begin working on contingency plans to best utilize the 2-year period, stipulated under Article 50 of the Lisbon Treaty, within which Britain would have to negotiate its exit from the EU.

Then, the BOT would need to reconsider many of Tanzania’s key trade and investment commitments and their future as well as the country’s development aid anticipations – although in its 2016/17 budget, the Dr. Magufuli administration has planned to cut aid dependency to 3% from 6.4% by augmenting revenue collection.

Tanzania is a large recipient of EU aid, channeled through the European Development Fund (EDF), whose main objectives include, among others, advocating pro-poor growth and improving economic governance and business climate. Between 2008 and 2013, the EU apportioned Euros 555 million to support the country’s poverty reduction strategy, known as MKUKUTA, and to boost efforts in infrastructure, communications, transport and trade.

The huge scope of EU-funded development assistance in Tanzania has included the Road Transport Sector Policy (RTSP) project improving national and rural roads, the UNHCR-managed programme dealing with the influx of refugees, the EAC and SADC regional integration programmes, agriculture and food security projects mitigating the negative impact of volatile food prices on vulnerable households, community based healthcare projects, and projects for upgrading urban water supply and sanitation and for sustainable management of the environment and natural resources.

Moreover, as a crucial step in the programming of EU aid in Tanzania, the EU and Tanzania inked the National Indicative Programme (NIP) for the period 2014-2020 for a total of Euros 626 million towards general budget support, energy and sustainable agriculture.

An era of uncertainty heralded by the Brexit could start for Tanzania; given that the foregoing projects were negotiated under the hitherto 28-member EU bloc that has now shrunk to 27 members after Britain quit the bloc.

Indeed, one might ask: What, now, becomes of the recent EU- East African Community (EAC) and EU- Southern African Development Cooperation (SADC) Economic Partnership Agreements (EPAs)? Will Tanzania be required to renegotiate its trade relations with both Britain and the EU?

Within the EU, Britain is Tanzania’s biggest trading partner and Tanzanian business executives, entrepreneurs and professionals use London as their base to access the EU market; yet, Britain will no longer be a member of the EU and a party to the EAC-and-SADC EPAs in the post-Brexit epoch. Thus, a renegotiation of these EPAs will be inevitable.

It needs to be underscored that treaty renegotiation can turn out to be a protracted and costly process, which could result in lower trade volumes between Britain and Tanzania.

Likewise, while Britain is – in its own right – a member of the World Trade Organization (WTO), Britain will seek to have its own tariff schedule since it will stop relying on the Common External Tariff (CET or sometimes CXT) applied to products exported from Tanzania and other non-EU countries to the EU.

Put altogether, this may pose a real challenge for the Dr. Magufuli administration and the private sector. This is especially so in light of the intertwined economic relations and aid commitments. As a predominantly agrarian economy, Tanzania’s sectors likely to suffer most include food and beverages and other manufactured products.

Britain is evidently one of the largest contributors to the EDF, the EU’s chief instrument for development aid in Tanzania and other African, Caribbean and Pacific (ACP) countries and the overseas territories.

EU aid disbursements and FDI inflows into Tanzania could deteriorate, and the Dr. Magufuli administration’s capacity to fully implement its TZS 29.5-trillion budget for FY 2016/17 could be hampered. Fortunately, the administration has taken numerous efforts to curb public spending and to increase revenue collection since taking the reins of power last October.

Besides a possible slump in development aid, the Brexit may have negative implications for Tanzania’s bilateral trade with Britain and the EU.

Britain overtook France to become the world’s 5th largest economy in 2015, according to a report by the Centre for Economics Business and Research (CEBR). Britain is also one of Tanzania’s top 5 trading partners, and both countries have extensive bilateral relations in areas covering trade, investments, tourism, employment of Diaspora Tanzanians, and the GBP-TZS exchange rate.

In truth, a sustained fall in GDP to the British economy may enhance negative spillover effects for the Tanzanian economy.

What is more, Tanzania, affected by the oil price drop and China’s economic slowdown and market rout, could experience higher volatility in the GBP-TZS exchange rate as uncertainty grows and the U.S. dollar gains ground against its major rivals due to; in part, the demand for ‘safe-haven assets’ amidst the uncertainty. Just close to Tanzania, local media report the GBP was very volatile and transactions in the currency were mired across Rwanda.

But perhaps, with the Brexit vote, Tanzania’s trade and investment relations and development cooperation with Britain can only shape up.

According to media reports, Minister for Industry, Trade and Investment, Mr. Charles Mwijage, has said the vote will not affect Tanzania’s key economic links with Britain, save for those under EU treaties. Tourism industry analysts have also predicted tourism inflows from the EU into Tanzania will remain strong because, in the tourism sector, EU countries trade individually with Tanzania.

Besides that, there’s the view by the British Minister for Africa, Mr. James Duddridge, that development aid allocated straight from the UK’s Department for International Development (DfID) to Tanzania will be more efficient. In line with this view, should the majority of Tanzanians working in the agricultural sector expect Britain, which strongly opposed the high level of EU subsidies, to direct more support towards their farming activities and towards helping them become more competitive?

We can expect Tanzania and Britain to reaffirm respective relations as the foundation for deliberating on policy priorities and promoting more inclusive and sustainable economic growth in Tanzania, so as to reduce poverty.

Nevertheless, as new uncertainties may transpire depending, of course, on the precise trade deal Britain can negotiate with the EU and on how swiftly the deal can be sealed, the Dr. Magufuli government and private sector businesses need to add Britain’s exit from the EU to their contemporary agenda.

If, however, a swift trade deal giving Britain some favourable access to the EU market is sealed, the uncertainties and risks for Tanzania may ‘evaporate into thin air’.