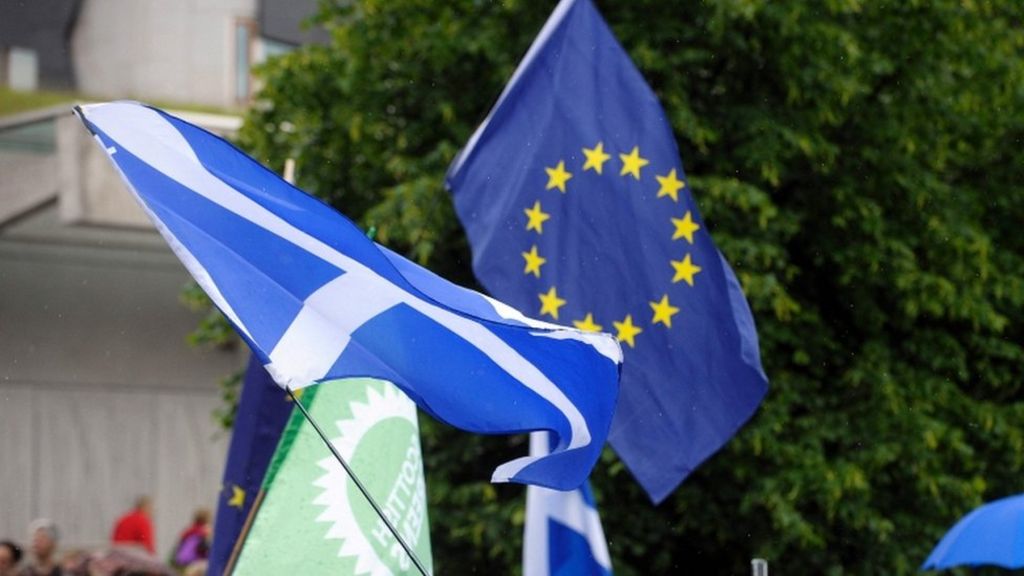 Scotland’s economy will be “cushioned” from the likely “significant negative impact” of Brexit compared with the rest of the UK, a new report claims.

An analysis by the Fraser of Allander Institute says anything from 30,000 to 80,000 jobs could be lost in Scotland as a result of the UK leaving the EU.

But it said the effect on the rest of the UK would be even more severe.

Prime Minister Theresa May has insisted Scotland and the UK could “get a better deal abroad” after Brexit.

Holyrood’s Europe committee convener Joan McAlpine said the outlook was “grim”, and warned there could be a “huge constitutional crisis” if Holyrood was not consulted about the ‘Great Repeal Bill’, which severs ties between the EU and the UK.

The report from the Fraser of Allander Institute examines a series of potential post-Brexit scenarios. These range from an “optimistic” model similar to Norway’s relationship with the EU to a “pessimistic” one based on a so-called “hard Brexit” outside the single market, based on World Trade Organisation rules.

The group said the most optimistic outlook would see Scottish GDP drop by 2% within 10 years, causing the loss of 30,000 jobs. The most pessimistic model would see GDP 5% lower within a decade, with 80,000 fewer jobs in the economy.

Prof Graeme Roy, director of the Strathclyde University institute, said the “detailed assessment” had found Brexit was likely to have “a significant negative impact on the Scottish economy”.

However, the report noted that “throughout all scenarios, the estimated negative impact of Brexit on the rest of the UK is greater than it is on Scotland, in terms of GDP, employment and other measures”.

The report notes that “to a degree this acts to cushion the impacts on the Scottish economy”, adding the “shock” of Brexit could “induce net migration into Scotland from the rest of the UK”.

The prime minister has insisted Brexit will “enhance” Scotland’s standing in the world rather than diminish it.

Mrs May said the coming negotiations were “an exciting chance to forge a new role in the world”, and said Scotland’s financial expertise, shipbuilding prowess and food and drink could be global leaders.

But Ms McAlpine said the report “paints a grim picture” of the economy a decade on from Brexit.

The SNP MSP said: “Our committee has already found that maintaining access to the single market is key for business and industry in Scotland. If the UK government leads us into a ‘hard’ Brexit, the evidence presented in this report indicates that there could be disastrous consequences for jobs, exports and production.”

But the Scottish Conservatives said the report meant “the SNP’s go-to excuse for Scottish economic under-performance has been completely blown out of the water”.

Economy spokesman Dean Lockhart said: “No-one doubts the impact of Brexit will be challenging on a range of levels. However, this report also makes clear that the impact on Scotland will be comparatively less than the rest of the UK.

“That should focus minds in the Scottish government to work hard to get a positive result for Scotland in the negotiations, and not merely whine from the sidelines.”

Scottish Labour meanwhile said the report showed up the danger of a “hard Brexit”.

MSP Jackie Baillie said: “This report shows the cost of the Tories’ reckless Brexit gamble, and how vital it is that Scotland, and indeed the whole UK, retains access to the single market.

“When Theresa May hinted at a hard Brexit earlier this week, sterling crashed to a 31-year low. Even the most blinkered of Brexiteers cannot ignore the huge risk this poses to our economy.”

Ms McAlpine has also told BBC Scotland there could be a “huge constitutional crisis” if Holyrood was not consulted over the Great Repeal Bill.

There has been debate over whether Holyrood will have a say on the legislation that severs the ties between the UK and the EU, via the legislative consent system.

She said: “I would have thought there has to be a legislative consent motion (LCM), because it impacts on so many areas of Scottish law.

“I think there’s a huge lack of understanding about the devolution settlement. The Sewell convention means that if there’s a bill in the Westminster parliament which impacts on devolved areas, it has to get the consent of the Scottish Parliament.

“Clearly this impacts on devolved areas – and the decision on the LCM as I understand it is made here, by the presiding officer.”

“There would be a huge constitutional crisis.”

Scottish Conservative leader Ruth Davidson has previously said Scotland would be “integrally involved” in the process, but that “there is no veto for the Scottish parliament”.