Brexit Bulletin: How to Negotiate 28 minutes ago

Brexit Secretary David Davis calls the looming divorce talks between the U.K. and European Union possibly “the most complicated negotiation of all time.”

As it’s the festive season, today we offer Mr Davis – and Prime Minister Theresa May – something of an early Christmas present. Bloomberg’s John Ainger sought the advice of a group of people who should know what that means: professionals who have freed hostages, brokered divorces, secured peace deals and won poker pots. 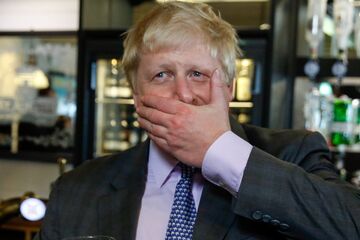 Foreign Secretary Boris Johnson has a habit of drifting off-message.

Their counsel has a common thread running through it: keep quiet. May needs to hold her cards close to her chest, the group said. She should keep lieutenants such as Foreign Secretary Boris Johnson in check, and she should listen more than she talks.

To the consternation of lawmakers at home and abroad, it is advice she is heeding so far. “You don’t get the best possible deal by laying out everything you want in advance,” May told the House of Commons on Monday.

May also gave Parliament her strongest hint yet that she’s considering a Brexit deal that would include a transitional phase to help businesses adapt, as well as continued payments into the EU budget.

The approach may be wise given a report published on Tuesday by the research group Bruegel. It concludes the U.K. would be better off paying to maintain access to the single market rather than hurting manufacturers by distorting their supply chains with tariffs.

Researchers Alicia García-Herrero and Jianwei Xu found the automotive sector faces the greatest cost from a reversion to World Trade Organization tariffs. They would add about $4.5 billion – or roughly half of the U.K.’s current annual net contribution to the EU – in costs to that industry alone. That includes a 10 percent tariff on cars and a 2 percent to 4 percent fee on car parts that pass across EU and U.K. borders.

The tariff impact would be felt harder by the U.K. economy than by the EU, with nearly half of its total intermediate imports and exports with the trading bloc, the report said. The U.K. makes up just 10 percent of similar EU exports and imports.

“The best strategy for the U.K. following Brexit is clearly to stay within the EU single market,” the researchers said.

“This would be the case even at the cost of paying the same contributions to the EU as a full member, because it would be more costly to compensate firms for all related tariffs in order to sustain the existing global supply chain located in the U.K.”

May speaks again on Tuesday afternoon, answering question in front of a parliamentary panel.

Six months to the week since the referendum, the prime minister will be emboldened by a new poll which shows voters would still back Brexit. 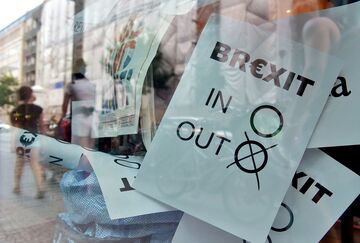 Forty-seven percent of Britons said they would support Brexit, with 45 percent saying they would remain and 8 percent undecided, according to the survey by ComRes for CNN. In June, 52 percent backed leaving.

Forty-four percent predicted they would suffer financially from the decision although 47 percent said they expected the country’s long-term prospects to be better outside.

Such data will embolden May as she prepares to trigger exit talks in the new year,with 53 percent agreeing with her that the country should not have another referendum on the terms of the Brexit deal.

For analysts trying to plot the course of the pound against the euro in 2017, the key decision is judging which side of the English Channel will see the most political turbulence.

Sterling on Monday reached its lowest level in almost a month against the dollar and is set to end the year as the worst performer among the Group of 10 exchange rates.

Strategists are now trying to pinpoint whether the debate over the nature of Brexit or the rise of populism in the rest of Europe carries the bigger risk. The dichotomy is evident in the most recent Bloomberg survey, where the range between the highest and lowest year-end forecasts for euro-sterling was at its widest since records began a decade ago. 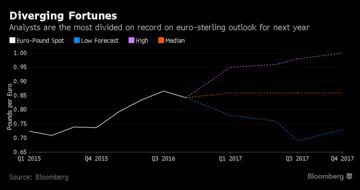 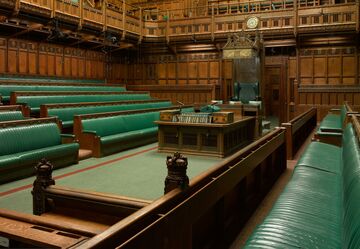 The House of Commons.

If you’re still trying to work out what Brexit means, the House of Commons library is here to help with a glossary of terms. Here are some highlights: