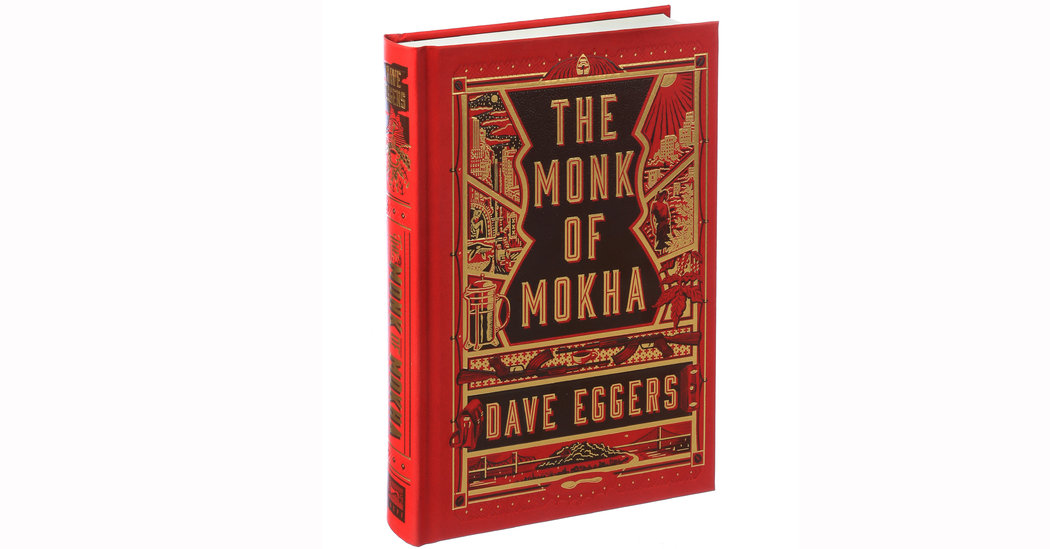 A woman is drowning. Her dress rises up around her waist, her legs dangle. She looks like a flower. She clings to a floating bookshelf, calling for help.

This is an image from Dave Eggers’s “Zeitoun” (2009), set in the aftermath of Hurricane Katrina, but it smoothly encapsulates the ethos of just about every one of his books: We live, we suffer, but if we’re lucky we can find — or fashion — stories to bear us aloft.

“The Monk of Mokha” is the third in his series of real-life accounts of immigrants to America caught in the jaws of history. “What Is the What” (2006) followed one of Sudan’s so-called Lost Boys, the thousands of children who fled villages decimated by civil war and wandered, for years, through lion-infested war zones. In “Zeitoun,” a Syrian-American survived Hurricane Katrina only to be rounded up as a suspected member of Al Qaeda. Each book is a tale of a latter-day Job and a reflection on the act of storytelling itself, none more so than this latest, in which a singularly reckless young man keeps himself alive like Scheherazade — his ability to spin stories ensures his survival.

Mokhtar Alkhanshali is a “lobby ambassador” (San Francisco for “doorman”) at a posh apartment building, where he spends his days waving in chandelier repairmen and pet nutritionists. The son of Yemeni immigrants, he grew up street smart and aimless in the seedy Tenderloin district, an inveterate loafer, sponger, bungler and charmer. An ideal character, in short, whose lofty ambitions and indifference to detail and danger give this story more zigs and zags than Lombard Street.

Life snapped into focus for Alkhanshali when he learned that coffee was originally cultivated in Yemen, some 500 years ago. Today, however, Yemeni coffee is regarded as some of the worst in the world. It became Alkhanshali’s obsession to restore its honor — never mind that he was broke, knew nothing about coffee and, frankly, didn’t much care for the taste. Never mind Yemen’s seething civil war.

Before you can say Horatio Alger, Alkhanshali was assessing coffee crops in Yemen with seasoned disdain and wearing, as you do, a garland of grenades that signaled his “willingness to take any argument to its logical conclusion.” His mission culminated in the most harrowing return journey this side of the “Odyssey” — but time and time again, he talked himself out of trouble; he has a preternatural gift for persuading others to join his cause.

Of late, Eggers the novelist has succumbed to sermonizing. He likes an easy target, and his recent fiction goes after predictable boogeymen: social media’s encroachment on privacy (“The Circle,” 2013), say, or addiction (“Heroes of the Frontier,” 2016). It’s narrative nonfiction that is his natural home. Telling other people’s stories seems to focus him. The sentences take on an Orwellian clarity — they’re lean and clean, flensed of the tics, doodles and strenuous self-consciousness of his early work, and of the dour didacticism of the new novels. In “The Monk of Mokha,” he moves lightly between story and analysis, and between brisk histories of Yemeni immigration to America; gentrifying San Francisco; coffee cultivation (“quite possibly the most complex journey from farm to consumption of any foodstuff known to humankind”); and the saints and thieves who dispersed the beans around the world.

You can dispatch the book in one sitting. I did, on a snowy Sunday afternoon. It left me warmed, but also wired, and a little twitchy. What is it about Eggers? What accounts for this aftertaste that is equal parts admiration and suspicion?

Surely few writers have so tirelessly sought to be of service. “I am owed,” he wrote in “A Heartbreaking Work of Staggering Genius” (2000), his zeitgeist-defining memoir of losing both parents to cancer just weeks apart, leaving him, a college senior, to raise his 8-year-old brother. In every book since, however, the emphasis has shifted. As if to atone for sudden stardom, he considers a different idea: What do I owe?

In his second book, the novel “You Shall Know Our Velocity!” (2002), two friends embarrassed by their fortune travel the world trying to give it away — rather like the author himself, who has used the proceeds from his books to establish tutoring centers, schools in Sudan and foundations in the names of his subjects. To find a way to be useful has remained a central concern — it’s the “lapsed Catholic” in him, Eggers has said, who doesn’t believe writing is real work and longs for “real-world application.” “Let us do something, while we have the chance! It is not every day that we are needed,” goes the Beckett quotation, part of which serves as the epigraph for Eggers’s novel “A Hologram for the King” (2012). It’s this very quality that unites him and his subjects. “He had never felt such energy and purpose. He was needed,” Eggers writes of Abdulrahman Zeitoun, the hero of “Zeitoun,” who paddles his canoe around waterlogged New Orleans, rescuing and feeding marooned people and animals.

Of course, Zeitoun himself took a very different turn after the book was published. In 2012, he was accused of attacking his wife with a tire iron. He was charged with attempted murder and, later, for trying to hire another inmate to finish the job. He was exonerated, but the feeling lingers that Eggers treated us to a partial portrait of the man, that he had skirted some inconvenient truths, some essential darkness.

So it is with “The Monk of Mokha” — a conspicuously PG-13 story of race, religion and manhood. As a teenager working at the mall, Alkhanshali adopted a uniform of preppy clothes and was surprised to see how much kinder the world was to him. His friends started calling him Rupert, after the cartoon bear. In essence, this is the character Eggers introduces us to — the Rupert bear version of Alkhanshali, agreeable to the hilt, whose strongest emotion appears to be mild vexation.

This is by design. On the first page, we’re told that the trial of the Boston Marathon bombers has just begun. It isn’t mentioned again, but it hovers over the story, supplying the occasion for it. “The Monk of Mokha” is part of a wave of narratives introducing “the good Muslim”: funny and cuddly — almost aggressively unthreatening — and, crucially, never devout (see also: “Master of None” and “The Big Sick”). “His story is an old-fashioned one. It’s chiefly about the American Dream, which is very much alive and very much under threat,” Eggers writes of Alkhanshali. It’s about “U.S. citizens who maintain strong ties to the countries of their ancestors and who, through entrepreneurial zeal and dogged labor, create indispensable bridges between the developed and developing worlds, between nations that produce and those that consume.”

Eggers wants to humanize immigrants, but in his telling, something very different seems to occur. Everything about his characters is outsize — their bravery and suffering, their resilience and capacity for forgiveness, their contributions to the country. They are supermen, their powers “entrepreneurial zeal and dogged labor.” Time was, to make a home in this country it was enough to yearn to breathe free.