Books of The Times: Review: Nell Zink’s ‘Nicotine’ Is Hard to Put Down, Despite Its Unruly Plot

Nell Zink’s surname, which seems to combine the words “zing” and “sink,” happens to be a nice distillation of her prose style. She’s a deadpan comedian, her sentences funny yet plump with existential dread. Her novels give you that zinking feeling.

Her new one is called “Nicotine,” and like her previous books, it’s a mess: anarchic in its plot machinations, scrambled in its themes, mostly shallow in its emotions. You want her novels to be so much finer than they are. They’re like meals someone fussed over but forgot to put in the oven.

The strange thing is that you’re never tempted to put Ms. Zink’s novels aside. They contain so much backspin and topspin that you’re kept alert by the leaping motion. “If you can make the reader laugh,” the novelist Henry Green said, “he is apt to get careless and go on reading.” When I am reading Ms. Zink, my carelessness gets the better of me.

Her books are sexy. Each reader gets a little gift bag of concupiscence. Her brainy and frazzled women are at the ends of their wits. They need a bit of shallowness to cool the heat of their engines, and why else were cute boys put here? They want to silence the self-critical patter in their own heads. “You don’t need a narrative,” one character in “Nicotine” says, “when you’re making love.”

Plot doesn’t matter overly much in Ms. Zink’s novels. It is there when she needs it, like a small fleet of dependable Vespas, to shuttle her characters around. 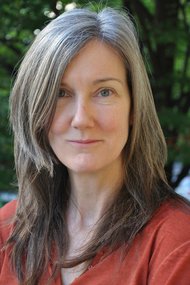 This book’s title, “Nicotine,” refers to a house in a rundown section of New Jersey that’s been occupied by friendly anarchist squatters. They’re all smokers, or chewers, or (God help us) vapers. They’ve banded together because they’re sick of being ostracized at climate-change rallies. It turns out that protest marches, like European airports, have smoking sections.

The house has a demented odor. This is because of the American Spirit cigarettes. It’s also because one of Nicotine’s core walls comprises fermenting excrement in large, sealed plastic buckets. (There is no room in this review to explain how it came into being.) Unlike the walls of Jericho, it will not need ram horns to bring it down.

Ms. Zink has a confident feel for the dynamics of a group house, and for the lives of young, earnest, befuddled, middle-class kids who will sacrifice a good situation in order to believe in something. They’re mostly kind and gentle. Some are, the author notes, “college-girl cannon fodder” for the someday revolution.

The milieu of “Nicotine” put me in mind of novels like T. C. Boyle’s “Drop City” (2003), about communal life; Jonathan Miles’s “Want Not” (2013), with its Dumpster-diving freegans; and Robert Newman’s lesser-known “The Fountain at the Center of the World” (2003), about the 1999 Seattle World Trade Organization protests.

It is a flaw of Ms. Zink’s novel that it contains little to no good writing about the consoling negative pleasure of smoking. “Nicotine” never once made me want to light up. (I quit 10 years ago.) The reader waits to catch an elegy that never pulls into the station.

Into Nicotine, the house, arrives Penny Baker, a recent college graduate at loose ends. She’s here not for political reasons but because this is the house her grandparents once lived in. (They perished, naturally, in a fire caused by smoking in bed.) Now that Penny’s father has died, the house is hers. But she doesn’t have the heart to throw out the kind, stinky squatters. Penny tells her mother: “It’s like having bedbugs that do the dishes.”

There’s no room for Penny at Nicotine, so she moves into another communal house not far away. The observations about politics, race, sex and moldy food begin to fly freely. The dialogue, as in all of this writer’s novels, delivers Zinkian pings.

One character says to a lover: “It’s like you got your entire sex education from Houellebecq novels.” Penny’s father, in a hospice, when asked what he wants: “I want for it to be 1951 and for you to be a root beer float.” I could listen to Ms. Zink’s dialogue all day; she may be, at heart, a playwright.

Penny is the product of a turbulent family. Her father, Norm, was a shaggy and beloved Jewish shamanist, a Ben Cohen who distributed psychedelics instead of Cherry Garcia. “He never healed anything,” Penny says of him. “He helped people pass the time and forget. And that is sainthood.”

Her much younger mother — whom Norm adopted before marrying — was a member of a South American tribe called the Kogi. She’s in love with Penny’s half brother, Matt, a smoldering capitalist bully who designs ecologically friendly garbage trucks. One resident says about him: “That man has a hard-core Satanist vibe. Like he swore on a goat’s carcass to be a sociopath.”

In a recent interview, Ms. Zink was asked why she was satirizing young political activists. (Her first published novel, “The Wallcreeper,” contained this observation: “Why exactly 20-somethings are considered so vital to protest movements, I never figured out, seeing as how they never vote and have no money.”) She replied: “I don’t think of it as satire because I like those people. I think of politically active, politically involved people as the salt of the earth. They’re my favorite people.”

In “Nicotine,” she does not wear her heart so fully on her sleeve. Ms. Zink’s voice is naturally satirical and subversive; she can’t help seeing that her characters are comic and sublime at the same time.

Her novel is set mostly in 2016. Donald J. Trump, mentioned in the novel, has begun to make his presence felt in America. When Penny is arrested at a rally, she’s concerned that she won’t be able to find a job. Another character says: “Don’t worry. Half the jobs out there, they want a criminal record, so they can pay you less than minimum wage.”

“Nicotine” follows what happens to its young men and women when they are forced out of their house and disperse across the country. They’re butterflies, you sense, about to be broken on wheel after wheel.