Bombardier’s CSeries program is finally getting off the ground with delivery of the aircraft to Swiss International Air Lines, the first carrier to accept the plane, after 2 1/2 years of delay and at least $2 billion in cost overruns.

The CS100 passenger jet was formally handed over Wednesday to the European carrier at Montreal’s Mirabel airport.

“A new aircraft program like the CSeries aircraft comes around once in a lifetime and it’s a proud achievement that belongs to many,” Rob Dewar, vice-president of Bombardier’s CSeries program, said in a statement.

The plane, the first of 30 firm CSeries orders by Swiss International, is scheduled to leave for Zurich on Thursday morning and begin regular service July 15.

The CSeries was making its first passenger flights in North America later Wednesday with members of the news media as well as suppliers and guests invited aboard two one-hour flights around the airport.

A similar flight took place June 3 between Dublin and Zurich. A test aircraft will also conduct passenger flights next month at the Farnborough Air Show near London.

Montreal-based Bombardier has struggled financially as it developed the CSeries, the largest plane the company has built.

The aerospace manufacturer recently finalized an agreement with the Quebec government on a US$1-billion investment in exchange for a 49.5 per cent stake in the CSeries. The province will make two US$500 million payments: the first on Thursday and the second due Sept. 1.

Bombardier is also seeking a similar contribution from the federal government. However, Ottawa has reportedly pushed Bombardier to change its voting structure, something the founding family that controls the company through multiple voting shares has said it has no intention of doing. 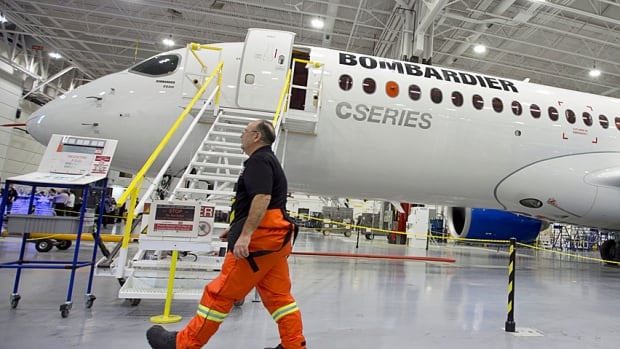 A Bombardier worker walks past the CS300 Aircraft in the hangar prior to its test flight in Mirabel last year. (Christinne Muschi/Reuters)

Government financial support has attracted the ire of Brazilian rival Embraer, which has threatened to launch a challenge at the World Trade Organization after Bombardier signed large orders for the CSeries from Delta Air Lines and Air Canada.

Bombardier has secured 370 firm orders and 252 options and purchase rights for the CSeries. The first CS300 plane, which is larger than the CS100, is expected to be delivered later this year to Air Baltic.