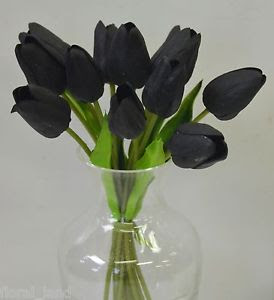 “This referendum handed Ukraine some black tulips: a symbol of farewell, often used to honor someone who has passed away.”

On April 6, 2016 the Netherlands rejected the EU-Ukraine Association Agreement.  By all indications this was to be a small fringe phenomenon in the wider picture of EU politics.  Yet the surrounding issues make this result – a whopping 61% populate the Neen-vote – indicative of a lot of strife ahead within the EU and a rising international disenchantment with the Ukrainian rapprochement movement.

Dutch media had primarily focused on whether the referendum would achieve enough voter turnout to be legal.  Published polls tended to show only a small lead to the no-camp, and any notable exceptions to this fable were countered by actual strategies to make people stay home, and hence invalidate the referendum.  To be fair, this strategy almost worked, yet enough people were motivated enough to express their frustration and flood the voting booths towards the evening.  The turnout squeezed by the validity requirement of 30% to 32.2%.  What was more astounding was the landslide of the No-vote: in the map below, it shows in red the townships that voted No, and in green the few that irked out a win for the Yes-vote.

What does this mean?  Already, the EU Commission came out with a spokesperson statement that ‘The No-vote will have no influence on the Ukraine treaty‘.  Prime Minister Rutte stated clearly that ‘There cannot be a simple moving forward with ratification now’.   Claude Juncker, EU Commission president, ‘is sad about the result’.   Guy Verhofstadt, ex PM of Belgium and current leader of the EU Parliament’s liberal faction, ‘is not surprised about this result; the EU is unable to resolve any of its current crises’.

The past can teach us how the EU deals with the pesky referendum problem.  Overall, it is treated as a nasty skin infection.  The problem is viewed to be local, is treated locally, or with some temporary change in diet, but surgery is out of the question, and so is any thorough antibiotic or antiviral cure.  In one case, in fact in the rejection of the EU constitution by the Netherlands and French referendae in 2005, did the actual constitution proposal get cancelled and morphed into a smaller, less ambitious version of itself, the Lissabon treaty.  In several other cases, the particular countries were given opt-out options, or ‘the ability to not implement’.   The Dutch ruling coalition is, for the moment, quite adamant that they should try to cancel the agreement or renegotiate the most objectionable parts.  Most likely, Rutte’s efforts will focus on the latter.  The most objectionable part of the agreement to the No-camp was two-fold: the possible military cooperation and the appearance of the Association Agreement as a stepping stone towards EU membership.

Ukraine’s leading political class did try to involve themselves in the Dutch referendum, both by Poroshenko’s visit, by TV commercials provided to the yes-camp, by a US grant-funded project of Ukrainian students doing canvassing on public transport in some Dutch cities, by a flash mob outside the Dutch embassy in Kyiv.

Closer to the referendum, as the polls continued to point in the wrong direction, there was more of a dismissal of its importance, but as late as the morning of April 6 Ukrainian media were showing an exit poll strongly favoring the yes-camp: 59% for, 41% against! 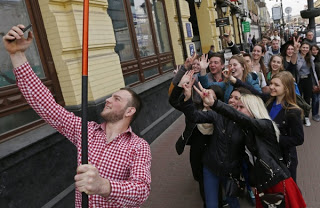 It is telling for the web-savvy Ukrainian media to have found this utterly irrelevant poll through a Dutch diplomat in Tokyo (presumably, this poll actually reflected the few Dutch expats in Tokyo that came out to vote at the embassy).

But what does this actually mean?  I would like to point out three main points.

First, this referendum is another deep line in the sand to the EU.  Not because of the referendum itself, but because of the savvy and organized approach by EU skeptics, using the internet to harness widely ranging opinions skeptical of various EU policies into this one direction.  While the EU machine cannot be said to have ignored referendae in the past, overall the machine has rumbled on with only very small democratically fueled diversions.  This line in the sand co-joins with major cracks in the system: the EU migration policy, its foreign policy that is carefully wedded to NATO and US interests and sometimes goes against a growing number of EU member interests, and the overall growing disillusionment with government in general that is feeding the right-to-far-right parties in the UK, France, Belgium, Netherlands and multiple other countries.   The EU migration agreement with Turkey is under heavy fire right now, both from the left and the right.

Second, the Ukrainian story has failed at the European box office. The Dutch are famous for their no-nonsense, straight-as-an-arrow approach and the Ukrainian machinations have shattered the European Maidan value-fest of 2014. To most Europeans, Maidan itself now looks as an exception to the rule in Ukraine, a beautiful firefly but rare in the midst of the corrupt predators that roam this nation high and low.  Poroshenko’s Panama Papers role is unlikely to have moved the needle much further to the no-camp, but it likely confirmed the picture that has formed over the last two years: this country shouldn’t be touched, and shouldn’t be funded.  This referendum handed Ukraine some black tulips: a symbol of farewell, often used to honor someone who has passed away.

Third, in spite of the anti-Russian diatribe in pro-Ukraine video clips, in spite of a desperate delusional try by one of my social media antipodes, Putin really didn’t come and meddle in this referendum.  Russia, Putin, the FSB, or Rasputin cannot be blamed for this vote – the Ukrainians can search in vain for another Putin cretin under their bed.  The Dutch were perfectly able to make up their own minds, and the Ukrainian silly PR for the yes-camp always sounded hollow and out of place, like a Santa story in April.  This is not a pro-Russia vote; but it is a vote to look again at all the options, without the expensive and unwanted silliness that the Ukraine story provides.

“The big worry for Ukraine is that they have been lumped together with the wider EU issues of migration, loss of sovereignty, democratic alienation, and terrorism inspired by wrong domestic and foreign policy choices: those will continue until a bigger crisis.”

In conclusion, we can expect the Ukraine EU Trade Association Agreement to be implemented, with some delay of some of its clauses, some delay to some member states and a few minor adjustments to give the Dutch a pat on the back.   The big worry for Ukraine is that they have been lumped together with the wider issues of migration, loss of sovereignty, democratic alienation, and terrorism inspired by wrong domestic and foreign policy choices: those will continue until a bigger crisis. At which time the Dutch can now say, “We Told You So.”

Josh Vanhee is involved in international business and humanitarian work across most of North-America, Europe and Russia.  Canadian and native Belgian, fluent in Russian, he lived and worked in Belgium, Netherlands, Russia and Belarus, and writes political commentary on current affairs.