Brexit is a problem not of Scotland’s making, First Minister Nicola Sturgeon has said, as she set out her plan for leaving the EU.

Ms Sturgeon said the UK must remain in the single market and part of the customs union and made clear that if Theresa May struck a deal that failed to do this she would call a second independence referendum.

In an attack on the the Prime Minister for her lack of a plan, Ms Sturgeon said her proposals were the only proper way forward set out by anyone in the six months since the vote to leave.

In it she proposed a Norway-style arrangement that would see the UK stay in the single market through membership of the European Economic Area (EEA) and the European Free Trade Association (EFTA).

She said: “I accept that there is a mandate in England and Wales to take the UK out of the EU.

“However, I do not accept that there is a mandate to take any part of the UK out of the single market.”

Setting out her vision in a 50-page paper titled Scotland’s Place in Europe, Ms Sturgeon said she wanted to “explore if we can find common ground with the UK Government around a solution that would protect Scotland’s place in the European single market from within the UK”.

However, she said that if Holyrood didn’t get what was wanted and the UK Government took Scotland out of the EU “against its will” then she had the right to call another referendum, as set out in her party’s manifesto. 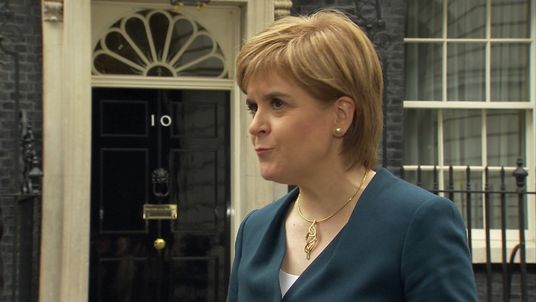 In Scotland, 62% voted to remain in the European Union and Ms Sturgeon said she believed the “best option” to maintain Scotland’s place in the single market was “to become a full member of the EU as an independent country”.

Ms Sturgeon said the Tories seemed “intent on placing a higher priority on cutting immigration than on anything else – the economy, jobs and living standards all lag behind on their list of priorities.”

She added that the proposals “represent a significant compromise on the part of the Scottish Government” and that the Prime Minister’s response would “tell us everything about whether the UK is a partnership of equals”.

The First Minister said Mrs May should be flexible in seeking a deal and should consider a different deal for Scotland as she has indicated she might for certain industries and the City.

She said: “It will also be necessary to take a flexible approach in relation to Northern Ireland and Gibraltar. There is no good reason why such flexibility should not also apply to Scotland.”

Mrs May has promised to look “very seriously” at the proposals set down by Ms Sturgeon, who voiced frustrations over the lack of Brexit process after a meeting with the Prime Minister in October.

A spokesman for the Prime Minister said: “The Government is committed to getting a deal on exiting the EU that works
for all parts of the UK – which clearly includes Scotland – and works for the UK as a whole,” said the spokesman.

“The best way for that to be achieved is for the Government and devolved administrations to work together.”