Are Venezuela's food shortages a sign that food security is still a risk?

From technological advancements in food production to our increasingly interconnected globe, many factors have reduced the risk of wide-scale famines. However, the current food shortages in Venezuela, which have plunged the nation into chaos, highlight that the threat of world hunger is not over for good. To discuss the future of food security, we talked to Stephen Devereux, a development economist from the University of Sussex.

ResearchGate: In this article, researcher Dr. de Waal argues that the time of famines may be over. What’s your view on this?

Stephen Devereux: I think Alex de Waal is probably right that the time of catastrophic famines is over, meaning those famines that used to kill hundreds of thousands or even millions of people. But that doesn’t mean that we won’t have more minor and moderate scale famines in the future. It is important to remember that we have had quite a few famines since the last ‘great famine’ in Ethiopia in 1984 that Alex mentions in his article. Already in the 21st century there have been four famines – in Ethiopia, Malawi, Niger and Somalia – the last famine was in 2011 in Somalia. Right now we have serious food crises in other countries, including in Ethiopia again, so I think it is a bit premature to say we won’t have any famines ever again.

RG: As climate change leads to more extreme weather, it is likely we will see more droughts in the future. What impact could this have on the risk of famines and food insecurity?

Devereux: Climate change has to be divided into two aspects. There’s the extreme weather events like droughts, floods and tsunamis, and those obviously create emergencies and require short-term humanitarian relief, which I think we will be able to deal with. Then there’s the long-term processes, like the gradual rise of sea levels or the gradual warming of temperatures, which have slower impacts on food security. In the long-term, in areas that are already marginalized, crop yields are going to decline, livestock will suffer because there will be less water, and people’s livelihoods will be affected. But there is time to prepare for that.

RG: What are the most important factors in preventing famines?

Devereux: A good way to look at this issue is to see what has changed over time. Look at the countries that used to be famine-prone and examine how they overcame famine, why they don’t have famine anymore. One important factor is the spread of democracy. There’s no doubt that democratic governments that allow freedom of trade, movement, and information are more likely to prevent famines than countries with repressive or controlling governments that interfere too much in the market or stop people from moving, prevent trade, and suppress information.

Another factor is how well-developed the markets and infrastructure are. It is still the case that some of the areas worst affected by food crisis and famine are those that are very remote and isolated, so it is difficult to get food in – there is no transport infrastructure and people are living in small communities far away from markets. Where you have well developed markets and people can access food through shops and trade and imports, like in cities, you’re much less likely to have famine.

RG: Today, politics tend to play a leading factor in the cause of mass starvation. Do you believe that this is less of a threat today than in the past? If so, why?

Devereux: On the contrary, that is the main problem that is remaining. If you look at how famines happen, normally they start off with a disruption in food availability or production, so for example there is a drought and people no longer have enough food. They then turn to the market and try to buy food and if they are too poor to buy food, or if there is no food in the market to buy, they have a problem of access. At this point, you have to have some kind of response. Either the government has to step in and help people buy food, or subsidize the price of food, or, if the government can’t do that, the international community has to step in.

That is where politics come in. In the past, when communities were completely isolated and they depended on their own production and local markets, a famine happened because there was no government or international community. Now that we have those institutions in place they should respond and there shouldn’t be famines anymore. If famines happen, it is because the government or international community failed to respond because they didn’t know about the problem, or they were in denial about the problem, or they were playing political games. 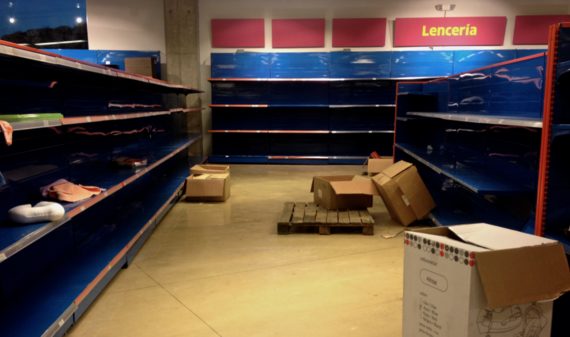 RG: Could you comment on the food shortages that are currently happening in Venezuela? What is causing this, and do you see a solution to the crisis?

Devereux: I am not an expert on Venezuela, but I think what is happening there is strikingly similar to what happened to countries like North Korea, which had a severe famine in the 90s, because the government intervened too much in the economy. Venezuela seems to have moved from being a free market economy to more like a controlled economy. There is a serious food crisis in Venezuela, because the government interfered in agricultural production and trade, and they are rationing electricity and water. All of these interventions in the economy made it difficult for people to access food. There was not enough being produced and people couldn’t buy food as it is being imported at exorbitant black market prices that they can’t afford, so people are now rioting to get access.

The obvious solution is to reverse some of the bad policy decisions they’ve made. For example, if you are forcing businesses to charge very low prices that are below cost for their product, then there is no incentive for producers or traders, so production and markets collapse. In the short term, the situation looks quite bad. The government has to admit that they need help. Venezuela may need to go through an emergency relief and recovery process until the economy can stabilize and the necessary policy changes can be made.

RG: Does globalization play a role in preventing the outbreak of famines?

Devereux: There are different aspects to globalization. The integration of trade is probably positive as it allows food to be moved from surplus areas to deficit areas, either through aid or trade. But another part of globalization that is more complicated is the relationship between donor agencies and organizations on the one hand, and governments and their people on the other. What often happens during a famine is that the relationship between governments and international donors is not good at the critical time, and donors don’t respond to government requests for food aid, or governments prevent donors from bringing in food aid.

This happened in Somalia, for example, where Al Shabaab was really instrumental in stopping food aid moving around when there was a food crisis in 2011. It was also a problem in Malawi in 2002 as the donors accused the government of selling the grain reserve and didn’t bring food aid in time. In Ethiopia in 1999-2000 the government was fighting a food war against Eritrea and donors didn’t send food aid because they thought the government would use it to feed their army.

“We used to think that the global population would grow faster than food production and that this would eventually cause famine. No one talks like that anymore”

RG: What effect has modern technology and farming techniques had on food security?

Devereux: It is quite striking if you look back at the 1970s or 80s, a time when we had this fear that the world would run out of food. This has completely disappeared. We used to think that the global population would grow faster than food production and that this would eventually cause famine. No one talks like that anymore, as we have realized that is not the case. The famines in China and India last century did cause millions of people to die, but today their populations are far larger and yet nobody talks about the risk of famine anymore. This is partly because of massive investments in agricultural production and farming, which means that food production has increased greatly. They are able to feed far larger populations than they even have now. If the world population stabilizes at around 9-10 billion people, which is expected, the technology that we now have will feed these people.

In terms of other technology, one of the most significant improvements has been in telecommunications. You can be in a remote village in Sudan or Somalia and send a text message to the world saying “we are starving here”, and that will likely mobilize an international response.