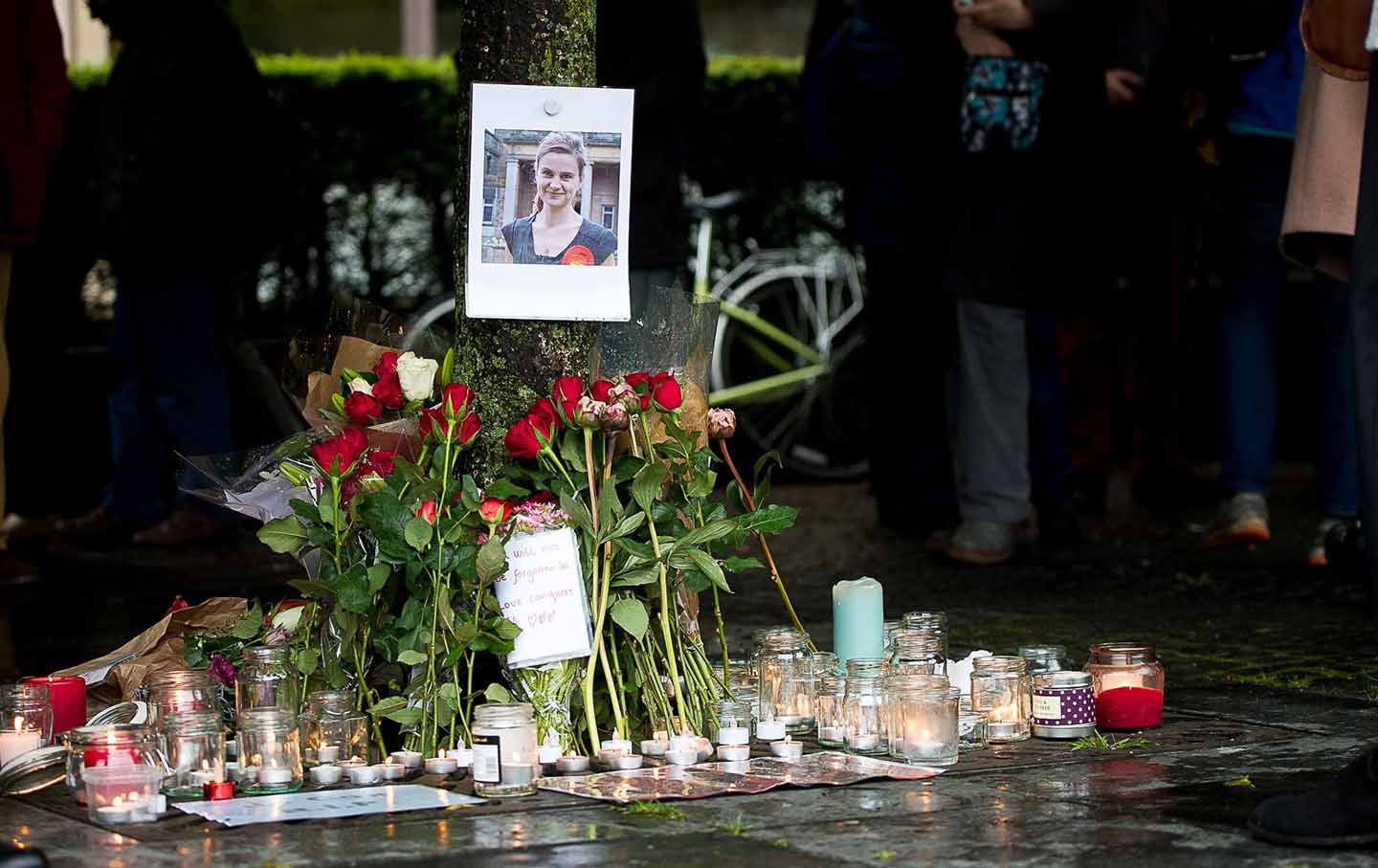 A memorial for murdered MP Jo Cox in Edinburgh on June 17, 2016 (Rex Features via AP Images)

The assassination of British parliamentarian Jo Cox is front-page news in the United States, and a subject of comment for American political leaders who recognize the vulnerable circumstance in which the world’s democracies find themselves. In an incredibly volatile moment where countries are rocked by debates about refugees and immigrant rights, about whether borders should be open and about the issues that extend from the globalization of economies, the political discourse has grown so intense, and at times so vile, that we have arrived at a critical juncture. It is no longer wise, or right, to imagine that threats to democracy are contained within individual nation states. They must be understood, and addressed, from a global perspective.

Hillary Clinton showed a good measure of this understanding in a statement issued Thursday, which began: “I am horrified by the assassination of British MP Jo Cox, murdered earlier today in her district in Northern England. By all accounts, she was a rising star. Her maiden speech in Parliament celebrated the diversity of her beloved Yorkshire constituency, and passionately made the case that there is more that unites us than divides us. It is cruel and terrible that her life was cut short by a violent act of political intolerance.”

“It is critical that the United States and Britain, two of the world’s oldest and greatest democracies, stand together against hatred and violence,” the Democratic presidential contender continued. “This is how we must honor Jo Cox — by rejecting bigotry in all its forms, and instead embracing, as she always did, everything that binds us together.”

Coming just days after what President Obama described as “an act of terror and hate” targeted an LGBTQ nightclub in Orlando, leaving 49 patrons dead and more than 50 wounded, the brutal slaying of Cox by an assailant who reportedly shouted the name of a far-right, anti-immigrant party as he shot and knifed the member of parliament, has sent another shock wave around the world. Much of U.S. media focused, appropriately enough, on the proximity of the British attack to next week’s “Brexit” referendum vote on whether the United Kingdom should leave the European Union – “U.K. assassination casts shadow over ‘Brexit’ campaigns,” read the USA Today headline. Cox passionately supported the campaign to “Remain” in the EU, while right-wing populists in Britain (who often sound a lot like presumptive Republican presidential nominee Donald Trump) have just as passionately promoted the so-called “Leave” campaign.

Call the Top 20 Recipients of NRA Cash in Congress

The Guardian calls a British killing “an attack on humanity, idealism and democracy.”

But Britain’s Guardian newspaper, in a moving editorial published just hours after Cox died on Thursday, recognized the killing as something more than an awful extension of an unsettled and unsettling political moment. They referred to the killing of Jo Cox as what it must be seen and understood as: “an attack on humanity, idealism and democracy.”

“The slide from civilization to barbarism is shorter than we might like to imagine,” observed the editors of the London-based newspaper that has evolved into a truly global publication. “Every violent crime taints the ideal of an orderly society, but when that crime is committed against the people who are peacefully selected to write the rules, then the affront is that much more profound.”

The Guardian writers explained something that was important about this particular shooting, and the issues that arise from it:

Jo Cox, however, was not just any MP doing her duty. She was also an MP who was driven by an ideal. The former charity worker explained what that ideal was as eloquently as anyone could in her maiden speech last year. “Our communities have been deeply enhanced by immigration,” she insisted, “be it of Irish Catholics across the constituency or of Muslims from Gujarat in India or from Pakistan, principally from Kashmir. While we celebrate our diversity, what surprises me time and time again as I travel around the constituency is that we are far more united and have far more in common with each other than things that divide us.”

What nobler vision can there be than that of a society where people can be comfortable in their difference? And what more fundamental tenet of decency is there than to put first and to cherish all that makes us human, as opposed to what divides one group from another? These are ideals that are often maligned when they are described as multiculturalism, but they are precious nonetheless. They are the ideals which led Ms Cox to campaign tirelessly for the brutalized and displaced people of Syria, and – the most painful thought – ideals for which she may now have died.

Before Jo Cox was elected to parliament last year, she spent 20 years as a campaigner for human rights in general and, in particular, for the rights of women and girls globally. Working with Oxfam GB (Great Britain) and Oxfam International, she played a critical role in reframing and extending the aid group’s approach to poverty in order to focus on structural causes and responses. I came to know her work in the early 2000s when – after the 1999 “Battle in Seattle” protests against the World Trade Organization’s corporate-friendly globalization agenda – Cox served in Brussels as was an essential figure in Oxfam’s campaigning to reform global trade so that the workers in the poorest countries of the world would no longer be exploited by “race-to-the-bottom” economics. After leading that project for a number of years, Cox became the head of policy and advocacy for Oxfam GB in 2005 and then, in 2007, she came to New York to lead Oxfam International’s humanitarian campaigns. During that time, as Oxfam’s Max Lawson recalled this week, “She was particularly brilliant at bringing huge energy to our campaigning around the desperate humanitarian crisis in Darfur.”

LIKE THIS? GET MORE OF OUR BEST REPORTING AND ANALYSIS

When a parliamentary seat representing the working-class region where she grew up came open, the young mother of two decided to make the run as a left-leaning Labour Party candidate – not because she was a classic politician, but because she was a humanitarian with immense experience who (as Oxfam’s Lawson noted) was “always believing we could win, and always passionate for change.”

In Parliament, as an advocate for refugees from Syria, for Palestinians in Gaza, for immigrants from around the world who sought safe haven in Britain, she brought movement energy to a political role. Jo Cox was precisely the sort of person that we should all want in politics. Even those who disagreed with her on particular policy proposals or agendas came to recognize this, as her short parliamentary career was characterized by constant efforts to form cross-party coalitions to address human-rights concerns.

Just as Jo Cox’s activism was global, the response to her killing must be global.

Service that promised so much has been cut short by an assassination that took an visionary woman’s life, but that also tore the fabric of democracy itself. That tear runs deepest in Britain. But just as Jo Cox’s activism was global, the response to her killing must be global.

This is a time to pause – in Britain and in the United States – and to ask what our politics is becoming. As the Guardian’s editors warn, this is “a time when divisive hate-mongering is seeping into the mainstream.” Noting the crude anti-refugee politics on display in the “Brexit” campaign, they observed that: “One might have still hoped, however, that even merchants of post-truth politics might hold back from the sort of entirely post-moral politics that is involved in taking the great humanitarian crisis of our time, and then whipping up hostility to the victims as a means of chivvying voters into turning their backs on the world.”

Those references to “post-truth politics” turning toward an “entirely post-moral politics” ought to send a chill through Americans who are watching the current presidential campaign. Democrats and responsible Republicans are right to be concerned. Donald Trump has played fast and loose with the truth and his campaign has stirred crude resentment against an American-born judge of Mexican heritage, against refugees and immigrants, against Muslims and against President Obama and anyone else who challenges the presumptive Republican nominee’s extremism. Trump sends too many signals that reject the great American promise of pluralism, and the equally great American promise of equal protection under the law. His response to the horror in Orlando was to congratulate himself for anticipating violence and to seek to exploit that violence.

It is vital that liberals and conservatives, Republicans and Democrats recognize, clearly and unequivocally, that a toxic politics threatens not just civility but democracy.

The British are speaking today of the need to “keep barbarism at bay.”

Americans should be doing the same.