Eight U.S. airlines will soon begin regularly scheduled commercial flights to and from Havana, Cuba. While most will not begin for 90 days, airlines currently operating charter flights to Havana are expected to begin regular service in just a few weeks.

The flights to Havana are emblematic of what looks like an upturn in the fortunes of the airline industry.

The industry and its investors have had a challenging year with fluctuations in oil prices, terrorism, and a global economic slowdown.

But now airline profits are up. The load factors — the rate at which airlines will break even after operating costs are met — are at record levels. Ancillary revenues for such things as checked baggage fees, entertainment, WIFI service, and meals are totaling more than $30 billion dollars annually. Fuel costs are lower. So, why have airline stock prices remained grounded?

“Part is attributable to overall salary increases, premiums for pilots, rising union costs, stock dividends for most airlines have doubled over the past 12 months, and there’s been a record stock buy-back by the airlines with surplus cash flow,” said airline expert Frank Holmes, CEO of U.S. Global investing,

And, for the past 52 weeks airlines stocks, in general, have taken a big hit. Most have lost approximately 50 percent of their 2015 value. Airlines stocks as a sector are way down, losing approximately 50 percent of their 2015 value. The good news: analysts say there is a lot of value and plenty of room for growth in the sector. Holmes calls it a GARPY situation: Growth At a Reasonable Price. He says, “They are the most GARPY looking stocks in the S&P 500.”

The International Air Transport Association (IATA), the trade organization for airlines, predicts the industry will have its most lucrative year in history with global profits of almost $40 billion, driven by a combination of cheaper oil and higher load factors. IATA director general Tony Tyler said lower oil prices are helping, although tempered by hedging and exchange rates. Tyler warned, “We are probably nearing the peak of the positive stimulus from lower prices.”

Holmes says “airlines learned how to live with $100 a barrel oil and $20 a barrel oil, they went through five years of bankruptcy, 80 percent of the industry was holding on by its fingernails off a cliff, and now with all the mergers, with Boeing having a 10-year backlog of trying to get more efficient planes, I think you’ll see the industry do well.”

With all the good news, a large shadow hovers over the airline industry with concerns about security. Islamic State and its worldwide network of terrorists is potentially unsettling the traveling public. The security issue at airports, in the wake of airport terrorism in Europe, is a high priority for travelers. Just getting through security screening the past few months has been a nightmare at many U.S. airports as TSA, Transport Security Administration, employees have been overwhelmed. 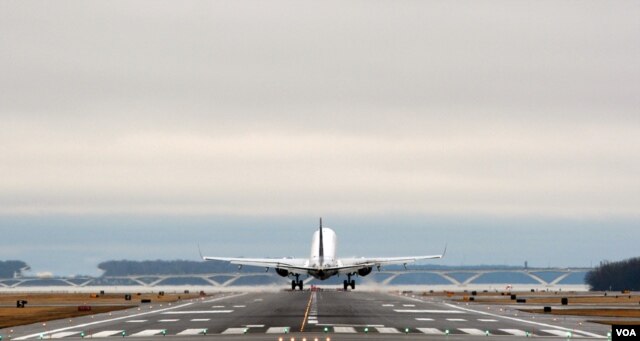 A plane is taking off at Reagan Washington National Airport outside Washington, D.C. (Photo by Diaa Bekheet)

Passenger volume totaled about 2.4 million passengers on both June 30 and July 1, the heaviest travel days since 2007. American airlines announced it will spend $5 million on new security initiatives at five hubs, in addition to the $21 million it’s already spending to hire contract workers. Delta and United have also boosted spending by millions of dollars to assist TSA workers.

The trade organization Airlines for America (A4A) has estimated passenger travel volumes this summer will exceed by 4 percent the previous all-time high set in 2015. About 231.1 million passengers (2.51 million per day), are expected to fly in scheduled service through the end of August. One-hundred-thousand flights a day take place around the world. With each Islamic State terrorist attack, however, there is passenger fallout, cancellations, change of plans.

Another issue confronting the aviation industry is the inability to petition for more routes and airport gates because there are too few trained pilots. In fact, major airlines had to extend pilots’ retirement age from 60 to 65 in order to avoid losing 20,000 flights daily.

Airlines can no longer count on U.S. Air Force or other military pilots to be their supply line. Many Air Force veterans no longer fly planes and jets, they are flying drones. Overall employment at the airlines is on the rise. This past April was the 30th consecutive month of Year-Over-Year employment gains. Approximately 405,000 people are employed by U.S. carriers.

The economic outlook for airlines has been enhanced by the dramatic rise of middle-class Chinese travelers. 104 million Chinese people have the same middle-class economic status as Americans. That means they are traveling and they are coming to the United States as one of the top choice, long distance travel destinations.

With President Barack Obama advocating a 10-year tourist visa for Chinese travelers, the uptick in air travel to America has been consequential, with New York City and the western United States as major destinations. According to one travel consultant, “America’s middle class was the big spender of the world for travel. Now you are going to see the Chinese as being more significant. They all want to come to America.”

The U.S. National Travel and Tourism Strategy set a goal of welcoming 100 million international visitors to the United States by the end of 2021. If that milestone is reached, the expectation of record profits and smooth flying for long-term aviation investors becomes increasingly likely.