A matter of business 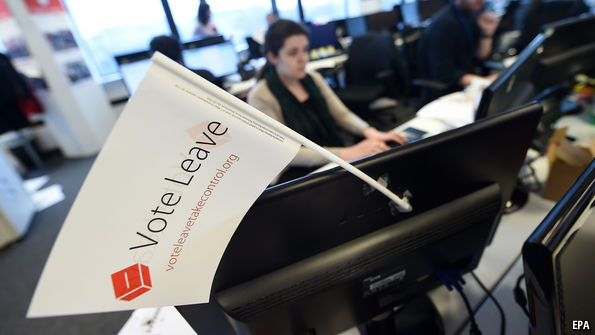 “THE business of business is business,” Milton Friedman once said. Many companies and trade groups follow his dictum, steering well clear of politics. Yet as the official campaign for the June 23rd referendum on Britain’s EU membership kicked off this week, more businesses were making their views known.

Vote Leave, which has just been designated as the official pro-Brexit campaign group, claims that business is evenly divided. Yet most polls by trade associations find big majorities for staying in the EU. A survey by the Confederation of British Industry (CBI) found 80% of members for Remain, with only 5% for Leave. In response to claims that it represents only big companies, the CBI points out that it speaks for 190,000 members, mostly small and medium-sized enterprises, and that 71% of SMEs want to stay. The Institute of Directors and the British Chambers of Commerce, with memberships that have a higher share of SMEs than the CBI, find most in favour. Even a majority of the Federation of Small Businesses narrowly backs Remain.

Specialist trade associations report similar results. TechUK, an IT group, finds 70% for staying in the EU. The EEF manufacturers’ association has 61% (see chart). A survey this week by the UK arm of the International Chamber of Commerce found 86% of international businesses supporting Remain. Groups as diverse as Universities UK, the Food and Drink Federation and the aerospace and defence association also report large support for Remain. 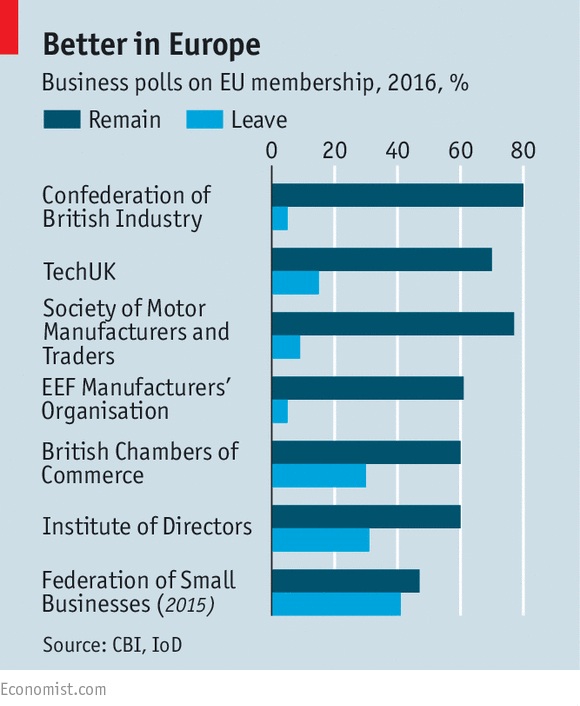 This is not to deny that some businessmen favour Brexit. James Dyson of the eponymous manufacturing firm is one. Like Alan Halsall of Silver Cross, a pram maker, he believes EU rules hamper the export of his products. Many small firms think that, since they do not export at all, they should be exempt from Brussels rules. Yet as Paul Drechsler, president of the CBI, notes, 25 years of single-market integration have created a supply-chain network so dense as to make such compartmentalisation impossible.

A good example of a business that benefits from the EU is the British car industry. Mike Hawes, the chief executive of the Society of Motor Manufacturers and Traders (SMMT), says it was largely moribund in the 1980s and 1990s. But thanks to foreign ownership and investment attracted by a gateway into the EU single market, it has revived strongly. It accounts for 800,000 jobs and 12% of British exports (80% of its output goes abroad). Britain now produces more cars than France. Fully 77% of SMMT members favour Remain, not just because future investment depends on access to the single market but also to retain influence over the industry’s regulation. Mr Hawes cites the case of an exemption that British lobbying secured from EU emission rules for low-volume niche producers like Lotus and McLaren.

It is a similar story for financial services. Mark Boleat, the policy director of the City of London Corporation, says his outfit has come out strongly for Remain in line with the views of the overwhelming majority of City firms. Like many businesses, they complain about the burden of regulation, but Mr Boleat points out that much of this now comes not from the EU but from either domestic or global sources. He says that even hedge funds, several of whose richest bosses favour Brexit, have been unable to point to any benefits from leaving the EU. 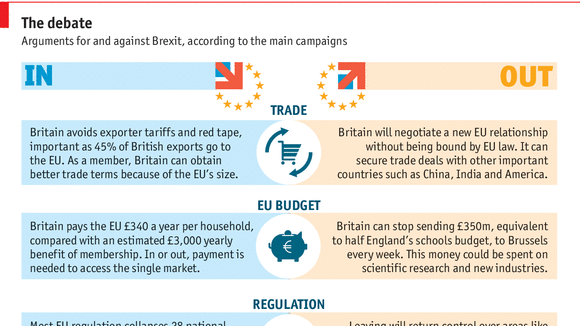 In graphics: A guide to “Brexit” from the European Union

Should business speak out more? Remain campaigners would like it to, as would the government. Mr Drechsler of the CBI says companies should be clear that it is not their job to tell people how to vote. But he says they would be negligent if they failed to spell out to customers, employees and suppliers the damage that Brexit will do to the economy and jobs. He does not want bosses to wake up on June 24th after a vote to leave feeling they had not done enough to spell out the risks.

Still, some business bosses are cautious. Airbus ran into heavy criticism when it wrote to all employees to warn them of the dangers of Brexit. Japanese firms in Britain are careful not to say explicitly that they might switch investment to continental Europe. Several supermarket groups refuse to talk publicly about Brexit for fear of alienating customers. The CBI itself is a favourite target of Brexiteers, who accuse it of being a Brussels puppet and wanting to join the euro. Yet for British businesses the Brexit referendum matters more than any general election. They must nerve themselves to stick their heads above the parapet if Remain is to win.