A glimmer of hope at the end of the year 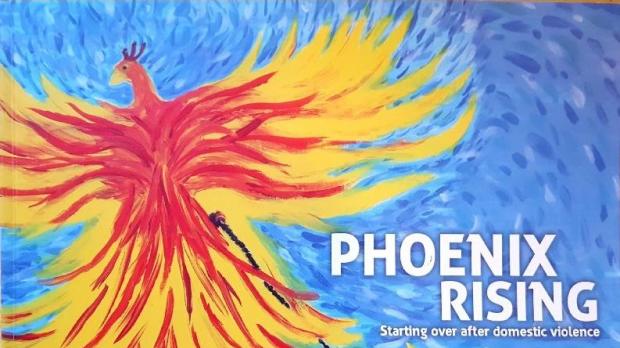 And it seems there is no sign of let up: only last Monday a Russian ambassador is shot dead at an exhibition, a gunmen attacked a Zurich Mosque and a truck ploughs into a Christmas market in Berlin.

So it was with some relief that I got a piece of good news this week.

It came wrapped in a blue, glowing yellow and red colours and had the words ‘Phoenix Rising’ emblazoned all over it.

It was the end result of six months hard work of five intrepid and courageous women, who, against all the odds, decided that enough was enough and that they were not going to stand for the way things were any longer.

But to better explain the birth of this small but important book, for that is what landed in my lap, I need to take you back to the Summer of 2015.

That time I met with about half a dozen women who had a compelling story to tell, and I was asked to help them tell it. These women called themselves ‘survivors’. Each of them had experienced severe (and in some cases extremely severe) domestic violence at the hands of their partners.

They came from all walks of life, they were ‘housewives’ (boy do I hate that word!), police women, some had professional qualifications. However they were all connected by their experience, felt that society was not taking this problem seriously enough, and wanted to do something about it.

Before the conference they gathered life experiences and spoke to all those involved in this sector: the police force, guidance councillors, the legal departments, social workers. They asked for their experiences, and their opinion on how to tackle the various issues.

Last December, just over a year ago, these five women stood up in front of a public of 200 people and told not just their story, but the story of tens of others, of hundreds of others, indeed of thousands of others.

They spoke of their experiences when they summoned the courage to report domestic violence and were told to go back home ‘for the sake of the family’, they spoke about being moved out of their own home ‘for their own protection’, about not being able to start afresh because all their money was kept by their partner, about the legal issues that allowed cases to drag on for weeks, months, years even; about the effect on their health, their children, their ability to hold down jobs.

But they did not stop there. They then offered solutions to many of these problems, and they asked all 200 people gathered there to discuss these solutions and to come up with others. Then, and this was the best part of the event, the 200 did get up and discuss and offer solutions. Police officers were seen discussing with lawyers with social workers and with survivors themselves.

And what landed in my lap was a book containing the results of those discussions.

And the most fantastic part of this story is that, with a bit of luck, next year we will see a major law that will include many of these suggestions.

But that’s not all. We are already seeing changes taking effect. Police cadets are being better trained in domestic violence issues, and the different organisations trying to tackle this issue are working more strongly together.

One last thing. None of this would have been possible without the seemingly never ending energy of the people running the St Jean Antide Foundation. Hidden away in a quiet corner of Tarxien, they are a one-stop shop for victims of domestic violence.

It is calculated that helping one client go through the journey, from the hell that is domestic violence to becoming an independent person, costs approximately €700 in man hours.

Their remit is one and one alone. To turn victims into survivors, and survivors into independent members of the community.

Its services are desperately in demand, and it receives help from a number of volunteers. But it does have running costs. These are partly paid for by seeking grants for specific projects. However it would be in a much better state if it had a more stable financial footing.

It is calculated that helping one client go through the journey, from the hell that is domestic violence to becoming an independent person, costs approximately €700 in man hours – not a huge price to pay to give back a person his life.

This is why this Christmas I am asking readers to find a bit of spare change to help this small foundation whose work affects not only the lives of these survivors but also their families.

There are several ways to donate. Contact them at [email protected] or visit their website for more information http://www.antidemalta.org/

As for those five intrepid women. In my book they are no longer survivors, they are well and truly heroes, each and every one.